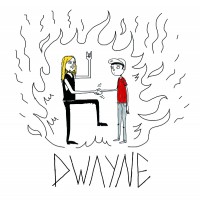 Upon the first couple listens of Dwayne's Self Titled record, it's easy to hear their influences and how they use them in their songwriting. I have to admit, the first time I heard "Be With Me," I immediately though of Dwayne as a punk rock version of The Wiggles. The rest of the album proved me wrong fast. Dwayne is an excellent assortment of straight up melodic punk songs from a band that's somewhat of a supergroup.

While they are clearly a punk band, Dwayne has a lot of larger rock themes that sound like if Weezer and Alkaline Trio had a baby. "My Own Invention" is exactly what that hybrid sounds like and it's pretty awesome. As one of the slower songs, it gives the rest of the record something to revolve around.

Much of the melody on the album are catchy in a different kind of way. The songs aren't heavily upbeat, they're not happy, they're there for the sake of gloomy punk rock. Negative song titles like "I'ma Goin' To Hell," "I Had It All," and "Low Expectations" showcase the lyrical feeling of the album. Much of the downbeat melodies carry this gloom throughout the record.

The album truly makes a wide progression. After the upbeat tacky melodies of "Be With Me," the record becomes a lot slower and has a completely different feel. It's not a bad thing but "Be With Me" doesn't seem like it fits the feel of the rest of the record.

Fans of Alkaline Trio, Weezer, and Foo Fighters and many melodic punk bands will certainly find something to like about Dwayne. The band is full of nostalgic and reminiscent of many 90s punk band. The Band's Self Titled is a great portrayal of what the band has to offer down the line.