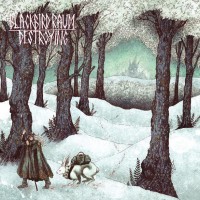 For those of you who donâ€™t know Blackbird Raum, they are a folk-punk band from Santa Cruz, California. And when I say â€œfolk,â€ I mean that Blackbird Raum is a very traditional folk band, in that this isnâ€™t your â€œtwo guitars, bass guitar, and drumsâ€ kind of band. With this band you get instruments like banjo, washboard, washtub bass, accordion, violin, mandolin, etc. In the liner notes of their newest release, Destroying, the band actually makes it a point to say, â€œNo electricity was used in the making of this album.â€ All of the members sing lyrics that stem from their anarcho/crust punk influences, which are usually about issues like socio-economics, environmentalism, and the criminal justice system with vivid imagery, which are personified by dark and haunting vocal melodies.

The track â€œLast Legsâ€ seems to be the centerpiece song of Destroying. This song begins with a bit of a droning melody that is shared by two singers who are accompanied only by a violin. Soon the other singers join in for the second verse and then the rest of the other instruments join in. At this point the deep baritone notes coming from the bass carry the bulk of the song. The chorus though, is where this song gets the most interesting. You have a female vocalist and one of the male vocalists sing lyrics like, â€œThis is just the lag time/Waiting for other shoe to drop,â€ while the other vocalists yell â€œLast legs!â€ in between each line. And eventually the rhythm speeds up and the goes into this instrument bridge where the mandolin and violin duel a bit until the tension in the song peaks and the rhythm slows back down to where it began. You watch the music video for this song right here on Punknews!

Another great song on Destroying is a track called â€œCadillac Desert.â€ In this song the banjo and accordion play together for a good chunk of the duration and the combination of these two instruments being played together makes this the most haunting-sounding song of the nine on this album. Not to mention the fact that one of the male vocalists screams, â€œDestroying/ Is it an addiction?â€ through out it as if heâ€™s in agony, which only adds to the horror. â€œCadillac Desertâ€ is also where we hear Blackbird Raumâ€™s take on environmental issues in their more metaphorical lyrics such as â€œThere is no water here/ Dowsing with manâ€™s will/ Drinking from the sand.â€

Destroying may be Blackbird Raumâ€™s most confrontational and emotion-filled release thus far. You definitely hear that the each member truly believes in what they are singing about by how much feeling there is in their voices. For someone who is used to listening to heavily distorted punk rock, I personally find their sound very refreshing. This album is a great addition to anyoneâ€™s music collection who is looking to diversify, but not stray too far away from the usual punk rock that we all enjoy.