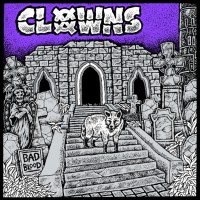 Melbourne is proving to be quite the fertile ground for punk bands lately. The city previously known for the grim post-punk of The Birthday Party and the goofy pop punk of Bodyjar has become host to all manner of punk outfits lately, ranging from literary folk punkers to bloodthirsty hardcore groups. Clowns, along with their fellow Poison City labelmates The Bennies and The Smith Street Band, seem to be forging a new path in Australian punk. Imagine if Comeback Kid and Minor Threat had a foul-mouthed baby, and you'd be pretty close to discerning Clowns points of reference. The band combine the speed of '80s hardcore acts with the more brutal and intense elements of modern hardcore, such as Trash Talk or Expire. The group's sophmore effort, Bad Blood, expands on the group's previous skate punk effort, I'm Not Right, to include much more of a hardcore sensibility, with just the tiniest hint of thrash thrown in for good measure.

Opening track "Human Error" is a seriously menacing and ferocious hardcore cut, with blast beats galore and featuring some downright evil vocals. "Never Enough" features slightly more melody, and a highly danceable main riff, reminiscent of Death From Above 1979 at their more hardcore moments. "Euthanise Me" opens with a solid bass line, before segueing into an almost rockabilly-esque riff that resembles an Australian take on Every Time I Die's southern hardcore. The title track is a gloriously uplifting slice of melodic hardcore, with soaring arpeggios and a killer drumbeat, which stands in stark contrast to the rest of the album's blistering hardcore. The title segues into "These Veins" which aptly continues in the same vein, mixing Bad Religion-esque aggression in with the kind of vocal harmonies that'd bring a tear to Glenn Danzig's eye.

"Swallow Your Dreams" is easily the standout track, a nice chugging monster of a track, with the kind of fuzzed out stoner riff that just screams "crossover success." The shorter tracks on the album are arguably the weakest, and seem like they just exist to fill space on the record. "It Stops With You" and "Is This A Test" are pretty much hardcore-by-numbers and sound like outtakes from some forgotten '80s grindcore album. "Infected" starts out promising enough, but becomes ruined by the sudden change towards pig squealing vocals near the end. It's as if the original singer just collapsed midway and they replaced him with a black metal vocalist out of nowhere. The final track, "Human Terror," is a sprawling prog-punk epic which resembles a more modern take on HÃ¼sker DÃ¼'s "Reoccuring Dreams" mixed with Floral Green-era Title Fight. It breaks up the pace quite a bit and feels hugely tacked on, but taken on its own it makes for quite a nice listen.

The neat thing about Bad Blood is how it occupies a nice middle ground in the hardcore spectrum. Clowns pay their respects to the '80s hardcore icons, but they don't do it to the point where their influences obscure their overall sound (e.g. Cerebral Ballzy, Gnarwolves). They manage to inject enough breakdowns and blast beats into Bad Blood to give their sound a more modern influence, but they pull it off without resembling one of those dull, HxC tough guy bands who desperately wish it was still the late '90s. Clowns are another great entry into the Australian punk canon, and a fantastic band in their own right. You could play Bad Blood to a teenager in a Backtrack hoodie or a grizzled mosh veteran with a Black Flag tattoo and both would find something to love about it. If there's one band seriously screaming out for overseas recognition, it's Clowns. Give this a spin if you're in a hardcore mood, you won't regret it.

Venom: From the Very Depths

Griever: Our Love is Different