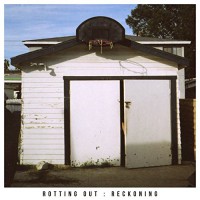 Rotting Out has had an incredible seven years as a band, thus far. Theyâ€™ve managed to become a staple in the hardcore community, blending their own fusion of punk into hardcore roots. On their latest EP, Reckoning, the band showcases their reinvented energy on their first formal release since signing to Pure Noise Records in 2013. With three new songs and two covers of seminal punk band, The Circle Jerks, Rotting Out exemplify their somewhat daring progression as a hardcore punk band.

The band has always put a punk spin on their hardcore sound, but with Reckoning they push their punk roots one step further making the punk influence sound more dynamic and prominent. The songs are much faster and certainly have a punk mentality, considerably different from previous releases.. Itâ€™s no doubt listeners will be intrigued by this progressive sound as it still fits nicely in the bandâ€™s discography with gang vocals and energetic verses. Songs like, â€œEnd Of The Roadâ€ shows how Rotting Out successfully balance their songwriting without sounding repetitive or overdoing it.

The best thing about the original songs is that theyâ€™re not predictable and catch the listener off guard at times. â€œBorn,â€ is the EPâ€™s metallic opener that would expectedly build up into a breakdown, but the band innovates a new Segue with melodically crunchy guitars that are unexpected and refreshing.

The EP is accompanied with transitions heard before or in between songs from the movies â€œTombstone,â€ â€œLawless,â€ and â€œFalling Down.â€ Whether the movie allusions have any reference to the album or not, the faint quotes create a dark pattern alluding to each song, adding texture to the albumâ€™s theme of reinvention.

Rotting Out further proves their progressive punk sound with consistency between the original songs of the EP and the covers. Their cover of â€œDonâ€™t Careâ€ adds a little more melody than the Circle Jerksâ€™ version, but overall doesnâ€™t add anything new or surprising. The covers are a great way Rotting Out demonstrates their punk influences, which explains the more punk than hardcore styling on this release.

Rotting Out is certainly an interesting addition to the Pure Noise Records family and with their heavily punk blended hardcore; the band truly stands out on the label and the hardcore community. While the band isnâ€™t reinventing the genre, Reckoning is a step forward for Rotting Outâ€™s progression towards a refreshing more punk sound.

Kind of Like Spitting / Warren Franklin: Itâ€™s Always Nice to See You