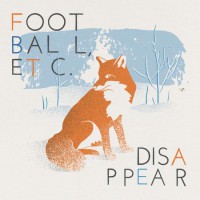 You can never have too much Rainer Maria. Or bands that pay homage to them.

Football, etc. definitely belong right up there with the wave of bands who placed paddles back on the emo genre. Even if in the smallest way possible. In just four tracks, you'll also find yourself feeling to head back into your Mineral discography and of course, good ol' Cap'n Jazz. That's how smart this band plays it on Disappear. Good, vulnerable record but it wears its influences a bit too much on its sleeve.

Lindsay Minton's vocals leads the train as always -- emotionally potent and quite immersive a narrative. Football, etc. have always seemed to build the music around her and in allowing her to take the forefront, she's always come in for some criticism as being too drab and hard to digest. I've never found this to be true as I enjoy her withdrawn and pained voice. "Sunday" and "Sweep" really bring out her agony and it's apparent that nothing much has changed in her delivery, bar a few more depressive notes here and there. "Will You Unbury Me Because I Can't Breathe" is a line that haunts off the latter.

Now, what does throw you for a loop a bit is that her attitude's mixed with twinkly and emo sound structures that feel a bit too repetitive at times and then struggle to mix and match with her vocal lead. Sometimes, the guitars feel too light for her lyrical content and come off as if they're struggling for identity and character on the songs. "Receive" is a tad more aggressive but the same fallout occurs here.

Audible was one of 2013's sleeper hits to me and it's always gonna be a record that'll keep me attached to this band. Houston, we have a problem. And that's that we need this band to shell out something more than four tracks and with a bit more diversity. I don't want to listen feeling like they're pigeonholing me into one sound. But damn, they do that sound well. "Open" closes off proceedings and it's made for fans of R.E.M. and '90s storytelling in general. Builds into a grungier little ending with some much-needed impetus on the kit for good measure. Dirtier and aggressive and I think this is the direction they need to explore a bit more. Don't skirt around this. Go for the gut and let loose!