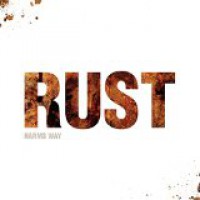 Harmâ€™s Way is one of those band names that is perfectly appropriate. Their sound is unbridled in its intensity and hostility. Their live show is just as accurately defined. And with the release of their newest full length, Rust, Harmâ€™s Way seem very much poised to conquer heavy music.

Rust is a record brimming with enmity. But so are the vast majority of hardcore records. So what is it about this record that stands out, right? Well, for starters, Harmâ€™s Way have sewn a great thematic approach into the record. The ideas of decay and rot are central to the lyrics and the artwork, making the title and content unified in a clever and honest way. The cohesion gives credibility and steadiness to the record, especially for those of you who enjoy focusing on the lyrical side of things. And while Iâ€™d be overstating if I suggested the lyrics were particularly poetic or complex, they do complement the music well and are brutally honest. That goes a long way, at least in terms of the recordâ€™s overall delivery.

What Harmâ€™s Way also bring out on Rust is measured experimentation with their sound. These gents are by all definitions an extremely heavy and aggressive band. But they donâ€™t submit to that definition exclusively, and that shines through on tracks like â€œAmong the Rustâ€ where the guest vocals of Colin from Twitching Tongues serve as a counter-balance to Jamesâ€™s gritty screams. The music and vocals are synched up perfectly for the bandâ€™s drop-D chugga-chugga rhythm. But the albumâ€™s best song, â€œTurn to Stoneâ€ has some great guitar-work that also complements the otherwise choppy heaviness of the rhythms. The lead guitars draw out notes to create an eeriness in the background. Guest vocals by Emily Jancetic on the song also help build up the songâ€™s power. Her soft interlude draws you in and disarms you just long enough before driving back into a mosh-heavy ending. What I like about most about these guys is the sturdiness in the song writing. They clearly have a vision for their sound and where theyâ€™d like it to fit in the landscape of heavy music. There is no pretense in Harmâ€™s Way. They do what they do, and they do it well.

If youâ€™re still not convinced in the power of Harmâ€™s Way, just go see them live. If heavy hardcore and a thoroughly aggressive live show is your wheelhouse, they wonâ€™t disappoint. Rust is the strongest release theyâ€™ve put out and itâ€™s a great representation of their identity. Pick this one up.