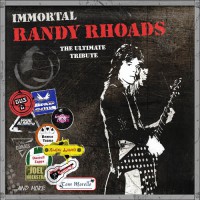 Thereâ€™s no question that Randy Rhoads is one of the best guitarists of the latter half of the twentieth century. The impact he made on guitar playing when he shredded for Quiet Riot and Ozzy Osbourne still influences many hard rock and metal guitarists to this day. Unfortunately, Randy left us too soon. He died on March 19, 1982 at the age of just 25 years old. To remember, celebrate and commemorate the life and legacy of Randy Rhoads, 20 musicians (including his brother Kelle Rhoads) got together to record 11 songs Rhoads co-wrote during his career to create Immortal Randy Rhoads â€“ The Ultimate Tribute.

Of course you canâ€™t have a Randy Rhoads cover album without what is arguably the most popular song of his career, which is â€œCrazy Train.â€ The musicians featured on this track are Serj Tankian on lead vocals, Tom Morello on guitar, Rudy Sarzo on bass and Vinny Appice on drums. Overall, the band got this song down right. Having Serj on vocals was a good choice because the nasally sound in his voice makes it so that the vocals donâ€™t stray to far away from Ozzyâ€™s on the original. Instrumentally, this song is pretty straightforward. It has an awesome and very recognizable guitar riff that anyone can recognize. As a guitar player myself, I can honestly say that it is probably one of the most played riffs amongst guitar hobbyists along with â€œStairway to Heaven,â€ â€œPurple Haze,â€ â€œSeven Nation Armyâ€ and â€œDammit.â€ Since this is a dedication to Randy Rhoads, the aspect of this album to pay most attention to is the guitar solos. Rhoads had a very distinct soloing style. He was one of the first to perfect â€œtappingâ€ and using the whammy bar to â€œdive bomb.â€ The question when it comes to â€œCrazy Trainâ€ is, â€œDid Tom Morello honor Randy Rhoads well?â€ The answer is â€œsort of.â€ If you are a fan of Rage Against the Machine or can somehow still stomach Audioslave, you can probably guess which direction Morello is going to take his guitar solo for this song. Itâ€™s a typical â€œMorelloianâ€ guitar solo. Itâ€™s filled with high screech bends (from his whammy pedal), techno-like fills, plenty of echo effects and super-fast, hammer-on licks. So it has a cool sound, but overall Tom took it too far and overdid it. His solo sounds like he is in his own world, which takes it off course of the entire song. A significant chunk of it doesnâ€™t seem to fit that well.

Another noteworthy tune on the Immortal Randy Rhoads â€“ The Ultimate Tribute is a track called â€œGoodbye to Romanceâ€ and this has to be the epitome of heavy metal love ballads that came out in the '80s. For this album, this song features Tim â€œRipperâ€ Owens on leads vocals, Joel Hoekstra on guitar, Rudy Sarzo on bass and Bret Chassen on drums. Overall, these four musicians got this song right. They managed to bring the '80s power ballad vibe back from the dead with this cover. Tim Owens vocals mimic Ozzyâ€™s pretty well, while still adding his own style to them. Instead of the acoustic sound the guitar had in the original, Joel Hoekstra decided to go fully electric with some light distortion for the plucking parts, which gives the song a bit of an updated sound. He absolutely kills the guitar solo though. Hoekstra seemed to learn Randyâ€™s solo note for note and it sounded like he actually played some of it even faster than Randy did on the original track.

The Immortal Randy Rhoads â€“ The Ultimate Tribute is for Randy Rhoads super fans. It will help them reminisce about the '80s, the decade of big hair, shoulder pads, Ronald Reagan, 20 minute long guitar solos and The Morton Downey Jr. Show. This album has a very niche audience and thatâ€™s its main problem, aside from the fact that a lot of these songs are outdated. That isnâ€™t to say that Randy Rhoads was not an insanely great guitar player. He definitely left his mark on rock nâ€™ roll guitar playing. Itâ€™s interesting to listen to once if you are not one of these super fans, but thatâ€™s it. I have a feeling that this album will be somewhat forgotten in the next six months to a year.