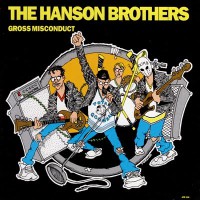 The Hanson Brothers have got to be one of, if not the, most fun and yet technically proficient pop punk bands that has ever existed. The hockey-obsessed mutant alter ego of Canadian punk veterans NoMeansNo, the Hanson Brothers take a concept as simple as Ramonescore, crank the musicianship up to 11, and let their freak flag fly with a zeal, humor and strangeness that will probably never be matched. At no point is their brand of weird "puck rockâ€ better exemplified than on their debut 1992 album, Gross Misconduct, 14 of the zaniest yet technically shredding pop-punk songs committed to tape.

Led by Tommy and Johnny Hanson (brothers Tom and John Wright), their image is composed of one part Ramones (made most evident by the coverâ€™s nod to Road to Ruin), and one part eponymous â€œSlapshotâ€ hockey goons. For all their weirdo posturing and hilarious on-stage antics, including goonish tough-guy banter and a bass player sporting a hockey mask with â€œDUMBâ€ written on its forehead, the music speaks for itself; drawing from a range of influences while sticking close to the spirit of Joey and Company, the Hanson Brothers take the predictability of the genre and twist it into something wholly unique.

Opener â€œNo Emotionâ€ is an aggressive song with deep, pounding bass that belies the Hanson Brothersâ€™ goofy aesthetic. â€œMy Girlfriendâ€™s a Robot,â€ however, finds the Hanson Brothers right in the their goofy sweet spot, channeling the Dickies in a sad tale of Johnny Hanson dismantling his robot gal pal after she broke his heart. â€œNo More Head Cheeseâ€ is a spirited treatise against -- you guessed it -- head cheese, while â€œLovesickâ€ finds the band tackling the classic slowed-down Ramones-style ballad. For fans of hockey, â€œDuke It Outâ€ and â€œTootal Goombahâ€ should serve as proper anthems, for as stated in the song â€œButthead,â€ â€Hockeyâ€™s what I like the best/girlâ€™s donâ€™t understand the rest.â€ Certainly, this style of music is not for everyone, and in fact may earn strange glances from those unversed in or unused to such unapologetically poppy, silly music, but for those who love the Ramones and the cult of misfit strangeness surrounding them, the Hanson Brothers deliver.

More than 20 years removed from the release of this album, a lot of gimmicky bands have come and gone, to varying degrees of success. I do not see the Hanson Brothers as a gimmick, however -- they performed their schtick with such energy, love, and skill, it can only be looked back upon as endearing. Modern bands such as Masked Intruder have a lot to thank the Hanson Brothers for, as do fans of fun, lighthearted punk rock.