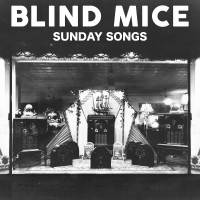 Blind Mice's EP last year, Comedown was a great little snippet of what the band offered. They incorporate a crunching '90s sound that has subtle tones of pop-punk embedded. But what's striking about Sunday Songs is the graver tone it takes, with more focused and driven tempos, which do offer some familiarity with their old stuff, but still stands out as comfortingly newer territory.

"Fifteen" and "Drifter" touch a lot of the record's concept. It's about a 15 year-old's POV at a stage in life when loved ones are dying and friends/family are coming and going. It's a coming of age album about identity and they do well to translate these themes in a non-too-aggressive manner. These tracks in particular feel like Funeral For A Friend as Ross Nunes' vocals are strikingly similar to Matt Davies'. As a fan of FFAF, it's a compliment in my books. The six tracks are brutally honest and work well amid crunchy guitars and catchy choruses. These songs are a tad unconventional by their standards but Blind Mice definitely maintains the intensity their fan base have grown to love.

The '90s alt-rock and 2000s emo inspirations are all over the record but again, it's a good backdrop for Nunes to spill his candor and prolifically so. I really took to how deliberate his stories come off and how they put introspection and nostalgia into context. That said, while Blind Mice offer up a good perspective of how they see the world, there are points where the record feels a bit blurred at times with respect to variety. When they mix things up a bit more, that's when they shine. Case in point, when they go a bit more cut-loose on "Madame Ruby" which threw me for a loop as it felt like a Basement track. It's little surprises like this that makes me anticipate more from them. Ultimately, Sunday Songs does hold up well. It isn't a bad follow up to last year's EP and gives a pretty good account as to the vision of Blind Mice. I'm eager to see them go into next gear.