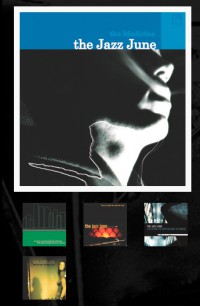 There is a lot to be said about the tenure of a band that was both prolifically underground yet extremely influential. In 2014, after over ten years of disbanding, The Jazz June reformed and signed to Topshelf Records. To commemorate, Universal Warning Records made a comprehensive rerelease of the Jazz Juneâ€™s discography on CD, along with a ton of live and unreleased digital content. The Jazz June Discography Set includes an EP, three full lengths and a compilation of material from seven inches all heavily influenced by the emo/punk scene around the time of their existence.

Punknews did an interview with vocalist, Andrew Low where he reflected about the earlier days of emo and its influence. When asked about the emo revival, Andrew said, â€œI think bands like Mineral, Knapsack. AF, etc. were combining the best parts of punk, indie and rock into a sound that has aged really well over time. Things got crazy in the early '00s and a lot of bands started working in really expensive studios with producers that re-styled their sound, but the original emo/post-punk stuff that those guys were making was just fucking good music. I am not surprised that people are still in to it in 2014.â€ Considering the sound has evolved over the years, I found it interesting because itâ€™s a great analysis of the scene. The fusion of genres truly made a huge impact on the early 2000s scene and has carried over to the current generation. The Jazz Juneâ€™s discography proves not only this progression in sound, but also the influence they provided along the way.

The 5-disc set includes reprinted original album artwork and spans across the bandâ€™s career before their reunion. The CDs physical appearance is incredibly nostalgic. Each one reminds me of the feeling of walking into a record store and looking around at all the album covers. These five albums certainly represent what youâ€™d see in your early 2000â€™s friendly CD store. The Simplicity of each disc shows that the passion and complexity lies in the music. The set contain no additional liner notes, which preserve the artistry of each album.

When your band is called The Jazz June, thereâ€™s really only one way to start your debut album, with intricate jazz drumming that eventually leads into shredding guitars. The album is a lot more punk driven than it is emo. Many of the songs have just the right amount of melody to accompany the heavier side of the record. The Jazz Juneâ€™s ability to encompass the heavier side of punk into a softer indie genre is an interesting spectacle of just one contemporary for emo.

The album is extremely raw and offers a look into an influential bandâ€™s humble beginnings. Originally released in 1997, many bands like Jimmy Eat World, Mineral, and The Appleseed Cast were just gaining recognition from a larger audience. They Love Those Who Make Music reflects that aesthetic and although they were relatively unknown at the time, their music would go onto influence a plethora of bands.
The album still stands the tests of time and can definitely be considered a classic in the emo genre. Truly, The Jazz June was looking for their sound that theyâ€™d eventually find and further it experimentally.

The first half of the album was emo/punk genius for the time period. Songs like â€œLow End Automatic,â€ â€œWhen In Rome,â€ and â€œRich Kid Shakedownâ€ portray the more punk side that bands like Christie Front Drive were perfecting into their sound at the time as well. These three songs all encompass the bandâ€™s punk driven sound while still trying to blend in their slower parts. Towards the end of the record, the band comes into their own with songs like â€œThe Oncoming,â€ and â€œFalling Asleep On Lincoln Drive.â€ Itâ€™s songs like these we really get to hear The Jazz Juneâ€™s sound peaking to perfection.

The bandâ€™s first EP is not quite as ambitious as the bandâ€™s full-length. Despite itâ€™s lack of The Jazz Juneâ€™s signature style, The Boom, The Motion, & The Music definitely has itâ€™s daring moments. Placing the â€œIntroâ€ track in the middle of the five songs definitely helped lead into the two more advanced tracks, â€œDrop The Bombâ€ and â€œHis Statue Fallsâ€ and while they donâ€™t quite represent the bandâ€™s sound, they offer more sophisticated songs that would ultimately shape the bandâ€™s sound through experimentation.

â€œHis Statue Fallsâ€ is 8-minutes of ambition that truly pushes the EPâ€™s worth before ending. The song sounds like Fugazi jamming around in a room but you can also hear the band toying with and finding their sound. In hindsight, it is easy to see how The Jazz June fit into the core sound of the time period. Bands like Mineral and The Get Up Kids certainly had an influence on The Jazz June and vice versa.

First off, Iâ€™d like to say that the artwork for this compilation is awesome. It completely encompasses the feeling of the forgotten aesthetic of CDs.

Breakdance Suburbia compiles sessions, splits, 7 inches, b-sides, and compilation appearances from The Jazz June recorded between 1996-1998. Originally from a two song Breakdance Surburbia 7 inch, â€œBurned Out Bright,â€ and â€œSilver Dollarâ€ have a more hardcore/grunge feel to them. The intro to â€œBurned Out Brightâ€ could sound influenced by Nirvana with the right set of ears.

Much of the album is the band combining their early sound with the sounds they would later perfect on The Medicine. The compilation of the songs overall has a groove to it that makes it worthwhile to listen to hear the bandâ€™s progression.

When listening to the albums in order, Breakdance Suburbia offers a much more raw punk sound that progresses as the band goes on. â€œThe Teenage Fight Songâ€ is a five-minute battle of raw punk mixed with emo bridges a la The Get Up Kids, which showcases the bandâ€™s true potential early on in their career.

Essentially, Breakdance Suburbia is for the diehards. The compilation wouldnâ€™t really appeal to listeners unless they were familiar with the band prior. Not to say that the songs are bad, but The Jazz June has albums full of fresh material that are much more susceptible to outside listeners. The compilation offers a lot of great songs that may not have fit albums, but fit together appropriately on one disc.

Also, did I mention how rad the artwork is?

One of the edgiest Jazz June records, The Medicine threw a wrench in the emo gears. The album has a much heavier vibe than previous releases and was much more experimental on the heavier side. While the band had previously had some pretty hard-hitting songs, The Medicine is perfected and composed for a much more definitive sound that could be considered the opus of The Jazz Juneâ€™s career.

The album has every aspect The Jazz June perfected. It took the band three years to release a sophomore album, which is surprising because of the consistency in sound between albums. From the very beginning the album takes off and follows a pattern. â€œViva La Speed Metalâ€ is quite possibly the most gripping opening Jazz June track of their discography.

The Medicine Offered a middle ground for The Jazz June. The band came out with a much edgier record that showed off more aggression on the emo side as well as the punk side. More songs werenâ€™t relied on speed but instead slow edgy guitar tones that were much more melodic.

The rest of the album shows off a fusion of the bandâ€™s sound, with a little more influence in it. Songs like, â€œMotorheadâ€™s Roadie,â€ â€œScars To Prove It,â€ and â€œDeath From Aboveâ€ showcases a different side of the band infused into their original songwriting. â€œPhone Works Both Waysâ€ just might be the bandâ€™s masterpiece. The song has every element of the bandâ€™s sound and way more. The song is a sonic journey and an extraordinary composition.

Overall, The Medicine Bridges the gap between the Midwestern type emo The Jazz June created, to their experimental Final album, Better Off Without Air. Not only is it the bandâ€™s best album, it showcases an interesting time in emo.

Better Off Without Air Probably pissed a lot of people off. The album has a much more experimental energy that fused more than just indie, rock, and punk. After following the perfection of The Medicine, this album mustâ€™ve come as somewhat of a shock to certain listeners. There were no more slow emo sweeps, no heavy punk rock songs mixed with elements of pure emo, the band had changed.

In 2002, bands in The Jazz Juneâ€™s realm were changing as well. The pressure to break out of an aging genre hit a lot of the other bands in their scene. Jimmy Eat World released Bleed American, a total progression from the bandâ€™s previous work. Itâ€™s not surprising that The Jazz June decided to push the envelope and create something different based around the changing face of music for the early 2000s. Even The Get Up Kids didnâ€™t follow up their masterpiece, Something To Write Home About until 2002.

In hindsight, Better Off Without Air wasnâ€™t such a bad album, it just needed to age. The album came out at the right time, consistent with other bands. The only difference was, The Jazz June werenâ€™t on a major label, and their audience remained the same instead of expanding like fellow emo bands. The album is extremely intricate and shows off the more sophisticated side of the bands instrumentation.

While the first half of the album is well polished and intricate, the second half is very post-punk/rock with a lot of more complex parts than previous Jazz June instrumentation. Songs like â€œBenny Clarks Can," â€The Submarine Song, and â€Shots Firedâ€ all represent a reinvention of the previous emo styling The Jazz June were creating. While songs like â€œDrugs And Modelsâ€ and â€œWeâ€™ve Got Your Situationâ€ are experimental tracks in the veins of Fugazi. The title track is a spacy composition driven by lead guitars, a change of pace in the bandâ€™s side. The song almost has a reggae vibe to it. While the album reached for a new sound, it still managed to maintain a pretty underground sound.

The album closes the chapter of The Jazz June on an interesting note. The songs are extremely experimental at times and donâ€™t always fit the consistent cannon of The Jazz Juneâ€™s Discography. Through five releases, The Jazz June were certainly a big influence in the emo genre and created comprehensive albums that still matter today.