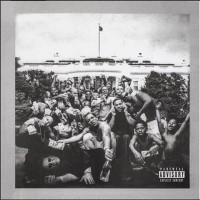 Kendrick Lamar is going through some shit. Give him 82 minutes, and heâ€™ll tell you about it.

In 2013, Kendrick Lamar dropped a verse that shook the hip hop community. Hot off the critical and commercial acclaim of good kid, m.A.A.d city, Lamar was untouchable, and he knew it. He called out nearly every one of his peers and challenged them to up their games on â€œControl.â€ Many tried but couldnâ€™t keep up. Two years later, Kendrick has made good on his promise: he is light years ahead of the competition. He is truly one of the greats.

To Pimp a Butterfly follows good kid in true Kendrick form. Itâ€™s long, itâ€™s wordy and it makes you think. He does not settle for simply releasing a rap record. He overanalyzes all aspects of it, combing through every musical and lyrical detail. Jazz acts as the backbone here, sprinkling itself throughout. It twists and turns and youâ€™re never sure whatâ€™s coming next. The whole thing is downright funky and the music wanders as much as Kendrickâ€™s thoughts.

â€œiâ€ the only survivor of Kendrickâ€™s three pre-album, late night appearance tracks (one on The Colbert Report, the other two on Saturday Night Live) at first feels like a red herring. Itâ€™s poppy and overtly positive, something this album is not. But when listening to the album as a whole, â€œiâ€ takes on new meaning. Butterfly is darkly introspective, and Kendrickâ€™s main focus is himself. Across the board he has a hard time dealing with fame, fortune and abandonment. Heâ€™s worried about what leaving Compton means to him and his community. He struggles with stardom but knows it allows him an ability to shine a light on things otherwise out of his control. â€œu,â€ the counterpart to â€œi,â€ is violent and angry and the latter half of the song is spent condemning Kendrick. He takes on multiple voices as himself and others trying to punish, temper or discipline him, but "u" is the clearest verbal assault.

The refreshing part about it, though, is Kendrick Lamar knows how to write a song. He knows how to add elements that lend themselves to an album experience. Every line represents some feeling. Every interlude feels natural. Every feature is handpicked for the greater good, not frivolous guest verses to sell singles. Thudercatâ€™s bass on â€œWesleyâ€™s Theoryâ€ and Rapsody's exciting guest verse on â€œComplexion (A Zulu Love)â€ are just as important as Snoop Doggâ€™s feature. After almost every song, Kendrick guides the narrative of Butterfly through repetition not commonly found on hip-hop releases. He closes his opus by interviewing Tupac about his own struggle and contemplates his purpose. (Tupac hologram part two?) Once again, he wrestles with his relevancy on a grander scale. Like good kid, To Pimp a Butterfly tells a specific story, one that's not necessarily finished yet.

It would have been hard for Kendrick Lamar to make a bad album. Heâ€™s too smart for that. Whether thatâ€™s because he knows how to push the right buttons or because his fans are predestined to love it, a Kendrick album (like a BeyoncÃ© or a Kanye West album) is an event. It comes with a certain presumption that the listener will be getting something fresh and new and important. In order for music to remain relevant, someone has to constantly play with its formula and propel it forward. Right now, Kendrick is that person, paving the way for any post Butterfly release. He has once again challenged his fellow rappers not to settle. This time, the result is his own beautiful dark twisted fantasy.