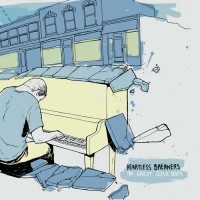 Ok, so the name is a bad start. Heartless Breakers have the sort of name that harbors ill will before even a single listen. But letâ€™s not judge a book by its cover. Every press release for these guys constantly touts that theyâ€™ve got Daytraderâ€™s Matt Mascarenas on guitar, and that certainly piqued my interest. But letâ€™s not judge a band by its lineage, either. The Great Give Back, the groupâ€™s debut full length, is not entirely what I expected from either the tacky name or the direction of Daytraderâ€™s final full length, Twelve Years.

Let me begin by stating: this is not a bad record. The musicianship is flawless and its slick-recording meshes well with the bandâ€™s sound. It just shoots so far down the middle that I find myself having trouble distinguishing one song from the rest and them from any other pop-punk-and-emo-driven post-hardcore band playing this exact sort of style. Heartless Breakers do a kind of hard-rocking take on what bands like The Audition, June and The Junior Varsity did a decade ago: tight, intertwining guitars with lead lines that never stray too far from the standard minor chord progression, a solid rhythm section that keeps things booming, and emotive vocals that produce big hooks. At their best moments, they manage an easy-to-chew Circa Survive or even -- and this is a stretch -- Good Apollo-era Coheed and Cambria (sans ear-piercing vocals). These guys have the sound down well, and itâ€™s a testament to their talent that thereâ€™s little to disparage in any of the songs. However, lacking is any kind of distinction that separated the former bands from the pack.

The band cites Taking Back Sunday as an influence, but the only obvious likeness can be found in the shared vocalist tics. Singer Chase Griffis employs the pop-punk over-articulation thatâ€™s been standard for bands like this since Tell All Your Friends hit the big time, and he uses inflated clichÃ©s that read like Adam Lazzara castoffs (â€˜Iâ€™ve always had a broken heart/ Iâ€™m so happy it still hurts/ Iâ€™m so lucky it still worksâ€™ is a pretty good example). This paint-by-the-numbers approach only further melds them in with the rest of the modern emo crowd.

There are reprieves on The Great Give Back where Heartless Breakers effectively break the mold, and those songs are the better for them. â€œPresence Unknownâ€ has a gnarly Manchester Orchestra-esque breakdown near the end. â€œAn Aching Kind of Growingâ€ uses a heavy, slow beat in its introduction with the snares off -- itâ€™s a nice, unique little touch. The final, titular track is an entirely instrumental and engaging closer that you wish lasted longer. But ultimately, these songs tend to follow a pretty strict genre format.

Again, this is actually a very listenable record. Itâ€™s got a lot of energy and is technically a proficient take on a well-worn structure. If you enjoyed the heyday of Victory Records, this oneâ€™s definitely for you. For me, Heartless Breakers just donâ€™t bring anything new, and in an already flooded music scene, itâ€™s hard for a band like them to stick out.