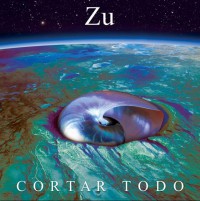 Zu is an Italian extreme instrumental act that has cultivated a cult following over the past 15 years and itâ€™s not without reason. Itâ€™s not without reason that theyâ€™ve gained a consistent following because while they root their music in metal, influenced by the low, heavy rumble of modern thrashers like High on Fire and Tryptikon as well as the dark, weird ambience of Neurosis. Itâ€™s also not without reason that theyâ€™ve remained cultish because: a) this music is not so easily labeled as â€œmetalâ€ or even â€œAvant-gardeâ€ and B)itâ€™s far out stuff.

Despite the bandâ€™s spastic, bombastic, thrash-tic nature, Cortar Todo seems aimed at the big leagues. Thatâ€™s not to say that this music is â€œaccessible.â€ Opening track â€œThe Unseen Warâ€ begins with a thundering riff, reminiscent of modern sludge-metal, but by the middle point, it shatters into a frantic sax solo while the band spins around the shrieking instrument. But, even in this mania, there seems to be a particular focus. Take Neurosis for example- they might be daring, but sometimes their newer work wanders so far off on their dark whims that they (likely purposefully) sacrifice drive for texture.

Not so here. Cortar Todo finds the band firmly in the driver seat, establishing themes, before breaking them apart, before starting themes anew. Itâ€™s likely no coincidence that this aggressive, but steely attack occurs as he band brings Gabe Serbian of the Locust into the band. Like the Locustâ€™s wildest stuff, Cortar Todo has seemingly random and abrasive elements jammed into patterns that break grooves in two, conjuring chaos where there once was a classic-metal resolve. But, unlike the Locustâ€™s ADD spasms, Zu is willing to work within the confines of â€œClassic metalâ€ before going ape-shit. The title track finds the band savoring an Amebix-style chug for a good three minutes before the whole thing shifts into what sounds like a steam-boat smashing into the Golden Gate bridge.

And really, thatâ€™s what elevates this release above many other freak-metal groups. There is a true appreciation and savoring of sonic texture here. The familiar Sleep-guitar rumble is drawn out for over a minute, just so we can feel the waves of distortion slog by, the magnetic fields acting as much as notes as chords. But, harsher elements, such as the Zorn-ish sax blasts of â€œRudra Dances over Burning Romeâ€ (a more fittingly titled instrumental you will not find) or the Hawkwind moan heard on the back end of â€œA Sky Burialâ€ are treated with equal respect. The band attempts to highlight the beauty, or at least the individuality, of ugliness. In weaker or less assured hands, this would dissolve into a grimy horror show. But, here, because Zu has such foresight, they make artfully nasty metal music that is as compelling as it is daring. But, because there is such an artisan hand crafting this racket, it never feels â€œchallengingâ€ or even calculatedâ€¦ it just feels like this is what naturally broke free from these guysâ€™ brains. Now thatâ€™s scary.

Pillow Talk: What We Should Have Said [7-inch]