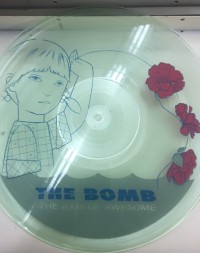 On their latest release, Axis of Awesome, The Bomb continues to pump out the same tuneful punk music they have on every release since Arming came out in 1999 and weâ€™ve come to expect from Jeff Pezzati since his days in Naked Raygun.

The Bomb succeeds at something many bands have a hard time with on this EP, delivering on expectation without sounding tired or bored with what theyâ€™re doing. And how could they not. Pezzatiâ€™s credentials aside, the band also features Jeff Dean of Noise by Number along with Pete Mittler and Mike Soucy of another legendary Chicago band, The Methadones. But, itâ€™s really unfair to compare the work of The Bomb to the legacies of these projects, as every release these guys have put out has legitimized them as having a unique voice that would have found its place in both the Chicago and national punk scenes.

Pezzatiâ€™s vocals have always been the hook for me with this band. The lyrics and playing are great, but thereâ€™s just something about the way he delivers the lines and the vocal melodies he is able to intertwine around the music. This is especially true on the track â€œSilent Fallâ€ where thereâ€™s a nervous power to the vocals. The nervousness is especially worth noting, because it generally fades when someone has spent decades fronting bands.

The cover of The Dwarves â€œBackseat of my Carâ€ comes off perfectly. While not a huge Dwarves fan, Iâ€™ve certainly always been able to appreciate them in small doses. Their take on the song doesn't differ greatly from the original, it works as a nice accent piece on the album. While The Dwarves are certainly not light hearted lyrically, they are a world away from the at times contemplative lyrics youâ€™d find on a release from The Bomb. And though, at only five songs, you donâ€™t need a moment to catch your breath and crack a smile while listening to this release. This song gives you exactly that opportunity and works well among the other songs here.

The Bomb have been putting out quality releases for well over a decade now, and this release is more evidence the credentials I handed out earlier arenâ€™t needed. This band deserves to be recognized as The Bomb, just like Fugazi became recognized as Fugazi and not a post Minor Threat or Rites of Spring project. Axis of Awesome is a great chapter in the career of one of Chicagoâ€™s best, and hopefully itâ€™s the chapter that lets the members of this band not need to stand on the shoulders of giants they helped create anymore.

You can hear the whole release right here on Punknews!