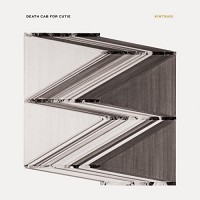 Death Cab For Cutie's Transatlanticism stands out in the body of their past as the main novel amid a plethora of coming-of-age stories. It felt like a culmination of a series of plots addressing growing up and trying to find oneself. But what happens when this happens and then, everything's inexplicably shattered? During the production of this 45 minute 11-tracker, lead guitarist and founding member Chris Walla announced his departure after 17 years (although contributing to the recording and creative process until the record was finished). Couple that with the dissolution of singer Ben Gibbard's marriage to Zooey Deschanel, and what you end up connecting with is that Kintsugi blooms as a beautiful, pained document, filled with melodies for broken hearts. It hinges on loss in adulthood and how tough it gets in looking to the future.

The album pulls no punches as it delves into second chances, redefining yourself and more so, discovering new paths and purposes. Especially ones just when you felt settled and comfortable. In a nutshell, all the anguish spilled here touches on survival. "Black Sun" transforms the old crib-of-youth ambiance of the band to an atmosphere of despair right off the bat. Instantly, you recognize the sadness and darkness on tap. The indie-pop-rock tones and tempos are dialed back a bit and its in this minimalistic nature that Gibbard pours his heart out. This song in particular touches on keeping the wheels turning and many other metaphors for life when the canvas you're painting feels blemished. There's a distorted solo that dirties the track so well amid the frail lyrics and soothing tropes that you wonder how DCFC manage to jam all this heavy lyricism into such powerful and surreal musicianship. "The Ghosts of Beverly Drive" and "Little Wanderer" are fashioned in the same way as you sense Gibbard begging people to stay in his life. He doesn't hold back comparing himself to a passenger on a bus while people neglect his offer to stay for the full duration of the journey. As the opening tracks dovetail into each other, it's then you realize that he isn't actually begging but politely asking everyone to keep faith and stay the course. It's also nice how he admits the world's dark and myopic and this scares him as he doesn't know the destination. DCFC do this with a subtle vibrancy and feel so mature, worn and centered.

I guess, it all comes with age. "Everything's A Ceiling" is one of those tracks you expected with its electro-dance vibe and assists in highlighting how balanced the album is. The album's emotional currency isn't lost on tracks like these no matter how catchy, foot tapping, head-bobbing, hand-clapping and hip-swaying they get. The severity of Gibbard's words never loses focus and rightfully so. You've got your acoustics and a lot of the old adding to the austere feel of their eighth full-length while still flavoring it with some new spices along the way, albeit depressed and dreary ones. Case in point, "You've Haunted Me All My Life" which is as much as tearjerker as it is an emotional roller coaster. Every track's worth the listen and each acts as a unique chapter. "El Dorado" talks about the city of gold and what Gibbard thought he found while "Binary Sea" pans out as simple yet distinct poetry to bookend things. DCFC often cover vast swaths of thematic ground whether its via ballet score, electronic concepts or calming instrumentals. They've never failed to synthesize lessons in humanity, character, history and geography. And often with finely detailed, tenderly emotional treatises on love, faith, grace, alienation, want and death. These 11 songs are no different but with their experienced value, they hold that much more worth.

Kintsugi by definition is a Japanese art involving fixing broken pottery, via a philosophy of treating breakage and repair as part of the history of an object, rather than something to disguise. It's an aptly-titled record because the songs here are all about self-repair and moving on. DCFC focus most acutely on the sadder, darker and more ambivalent corners of that world through intensely personal songs. As their discography can testify, the record's constructed with sincerity, care, a compassionate fascination with love, religious faith and an innate understanding of the way messy, overlapping emotions can color or cloud our memories. In a sense, it allows us silence to reflect, when someone loves you but isn't in love with you. Or when someone dies or simply, when you're looking for an alternative to noise and confusion. Ultimately, what you're left with is a grand story that demands all the attention your heart can offer. Why? Because the album starts off so melancholic yet it ends on an optimistic note. Because crafted here is a soundtrack for late-night drives and solitary Sunday mornings when every distraction is muted. When you see the world offering glimmers of hope and when rays of promise come streaming through the kitchen. This is one of the most profound heart and soul records I've ever experienced. Please, don't miss out.

The Bomb: The Axis of Awesome