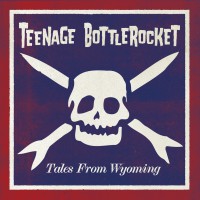 Wyoming. The least populous state in the US doesn't exactly conjure images of very much except snow, mountains, and vast expanses of wilderness. For just over a decade, however, Teenage Bottlerocket has worked hard to change that, putting out five full-lengths over that period and touring around the world with a range of disparate bands, from NOFX to Iced Earth. Bottlerocket's take on pop-punk has become instantly recognizable, and fans that have followed the band over this time have been rarely disappointed with their recorded output. Tales From Wyoming, their sixth full-length release (and first for Rise Records) is no different.

The band positively explodes on the opening track, "In My Head," chorus repeating in the first seconds, guaranteeing it to be stuck in Your head for hours later. It's a loud, urgent blast clocking in at just over a minute and a half, setting the tone for the rest of the album. Kody Templeman takes vocals on the following song, "I Found the One," slowing it down just a notch. "Nothing Else Matters (When I'm With You)" continues the Bottlerocket tradition of incorporating their love of Heavy Metal into pop-punk gems. While on previous albums, the band referred to Kiss and Ozzy Osbourne ("Bigger than Kiss" and "Headbanger," respectively), Bottlerocket uses Metallica this time around, declaring "That guy was such a dickhead/When we were sticking up for Jason Newsted/That's when you said you loved … And Justice for All."

"Dead Saturday" shows the more aggressive side of the band, while the following "Cockroach Strikes Again" slows it down a bit (by Bottlerocket standards, at least), providing a simpler, more plodding beat. "Been Too Long" speeds it back up again, driven by the vocal interplay between Templeman and fellow guitarist/vocalist Ray Carlisle. "Can't Quit You" has Carlisle telling the ages-old story about not being able to get a girl out of his head, declaring "Gave up smoking crystal meth …. but I can't quit you." While this would be unwelcome news to Walter White, even he wouldn't be able to avoid singing along and bobbing his head.

Tales From Wyoming is very much the album you would expect from the quartet, until the final song. For the first time, Teenage Bottlerocket has put together an honest-to-goodness ballad, focusing on acoustic strumming and strings on "First Time." It's a soft song, and true to its title, perhaps the first time that they have addressed heartbreak out of the guise of their usual sing-alongs and bombast. It's a pleasant surprise, and a wonderful way to close out the album.

Teenage Bottlerocket is back with a great collection of songs in Tales From Wyoming. You won't learn anything about the 44th state, but you will get your fill of more loud, pop-punk goodness.

Speak Low If You Speak Love: Everything But What You Need