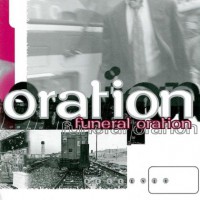 Traditional Dutch punk band Funeral Oration started off in the early 1980s releasing a few demo tapes and long since out of print albums that never gained any attention outside of the local scene in Amsterdam. A few years later they called it quits and that was that, or so they thought. In the mid-1990s, the launch of American punk label Hopeless Records brought a request to have the band revived for a second run. The group recorded three stellar full-lengths for Hopeless, along with a catch-all Discography collection. Although the band never achieved the same success as their American contemporaries, their output during this era is as critical as any in my record collection and itâ€™s a shame that the band remains unknown to most.

Believer is the second album of their Hopeless catalog. The purple and gray cover showing close-up abstract images of train tracks and rail yards does little to tell the story of this already mysterious band; this could be a jazz fusion record by the looks of it. Luckily, what you hear has absolutely nothing to do with what you see. From the opening chord of â€œAnother Worldâ€ to the last fading notes of â€œSo Cold,â€ the listener is bludgeoned with fast riffs, quick song tempos and enough aggression to inspire a rip at the local skate park instead of an avant-garde photo shoot of old train. The vocals of Peter Zirschky are incredibly unique and bring an almost Husker Du-like feel to the songs that would be otherwise in danger of being dismissed as just hard skate punk from Europe. Although itâ€™s clear by the heavy accent that English is not the bandâ€™s first language, all of the lyrics are in English and focus on the emotions and feelings experienced in everyday life ranging from â€œWill I Ever Tell You That I Love You?â€ to simply â€œFuck You.â€ Each song is fast and heavy but they donâ€™t all sound the same.

Iâ€™m not exactly sure where the shortcomings of Believer are. Perhaps this record, along with the rest of Funeral Orationâ€™s material, truly lands in a gray area. The songs have melody but not to the point of other classic mid-1990s bands, which could be a drawback if Lagwagon and No Use For A Name are kings of your stereo. On the other end of the spectrum, if harder bands that dabble in d-beat and crust punk are more your thing then this record is probably too polished and self-reflective in nature.

Funeral Oration called it quits for a second time just before the 1990s came to a close. Iâ€™ve read a few reports online claiming that Zirschky and drummer Erik Jansen have both since passed away. While the band remains somewhat of a mystery in punk rockâ€™s back catalog, Believer is a prime example of why they shouldnâ€™t.