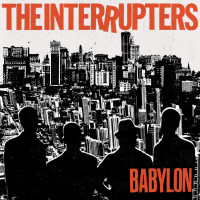 About a year after their self-titled debut album was released The Interrupters released a follow-up single with two new bouncy-sounding ska songs in mid-March 2015.

The track "Babylon" is a song that encourages the people to rebel against what The Interrupters call "the kings," which seems to be a metaphor the super-rich and/or politicians. It's another anti-tyranny and anti-authoritarian song, claiming the "the kings of Babylon" are there to squeeze as much of a profit out of you any way they can. The lyrical content isn't really anything many of us haven't heard many times before. Like many of the songs on their full-length, the instrumentation in "Babylon" relies on a very simple up stroke guitar chord progression. Nothing too original. What definitely stands out in this song is the pretty slick organ solo that appears halfway through. The band's vocals, especially during chorus are definitely a sign of improvement though. However, its almost as if lead singer, Aimee Interrupter, is putting on this voice as if she's is trying to be the female version of Tim Armstrong. In this song especially, you can hear the similarities in her speech pattern we compared to his.

Now if I had to choose my "favorite" song out The Interrupters' small discography, it would have to be the B-side track of this single, which is called "Jenny Drinks." I have to give it to the band this time because the melody in this song is pretty catchy. The instrumentation is still on the simpler side, but there are some good organ fills as well as a respectable Chuck Berry-esque guitar solo. And finally the band has written a song that doesn't have, what some call "punk rock starter kit lyrics" like they have in songs such as "Liberty," "Can't Be Trusted," arguably "Babylon," and others. Instead, the lyrics are about a woman is who a misfit and struggling to get by this world. This song is also where we hear Aimee Interrupter switch back to her gravely, Brody Dalle voice that she sang in through out the band's full length. Overall, it's not a bad song.

About a year after their debut album was released I am still failing to see the appeal of this band. Compared to their full-length, I would say that the band has improved slightly on their lyrical content and instrumentation, but nothing drastic. For a reason unknown to me The Interrupters seem to have a pretty big following (at least they do here in Los Angeles). It's not so much that I'm a hater, but what utterly confuses me about The Interrupters is that they just sort of appeared out of nowhere, immediately signed to Hellcat, and were taken under Tim Armstrong's wing at the same time. There didn't really seem to be any organic/grassroots fandom that got them noticed by their current label. They just seemed to appear out of thin air. Is it that the band comes off as manufactured as a whole that makes me so suspicious? Or am I looking into this too much and should I just take what they do for face value? I vividly remember feeling the same way when I saw them open for Rancid about two years ago before they had released any recorded music at all.

Thee Silver Mt. Zion Memorial Orchestra: Fuck Off Get Free We Pour Light On Everything