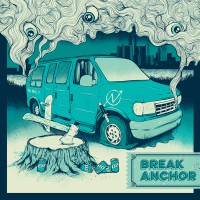 It may not even feel like spring yet where youâ€™re from, but the sounds of Break Anchor will make you believe itâ€™s already summer. Van Down By The River is a catchy, beer-soaked record with impressive punk melodies and smart songs. The band features Jay Navarro from The Suicide Machines, as well as ex-members of Seized Up and The Story So Far. Each song is seamlessly crafted with versatility and melody, which makes for one of the best punk rock albums in years.

Van Down By The River has that melodic hardcore punk edge of Fugazi and Hot Water Music. Vocals between Jay Navarro and Kyle Green adds a gritty and clean tone that go back and forth on songs like â€œ18 Winters,â€ â€œBlackhearts And Blackoutsâ€ and â€œFirst World Problems.â€ Both vocalists offer something special and complement each other as they rip through fast-paced harmonies and gritty choruses.

While the record is for the most part fast, the album holds itâ€™s melody and variety, not only in parts of songs, but entire songs as well. Tracks like, â€œDown And Outâ€ and â€œFell Apartâ€ gives the album a rounded-out sound. The songs vibe like early '90s post-hardcore and intensify the great variety on the album while maintaining a consistent vibe.

The album also blends skacore vibes into fast punk songs, something not all that surprising from Navarro. With ska verses that sound like Fugazi and Operation Ivy in a blender, Break Anchor prove they can innovate within their genre without breaking away from it.

Without a doubt, this album is preparation homework for summer. Despite the fact that Break Anchor is somewhat of a supergroup, the band manages to sound fresh and maintain an intuitive vibe throughout. Whether youâ€™re a fan of Jay Navarro or into well-formulated punk rock, Break Anchor definitely delivers.

Tartar Control: We Forgive You