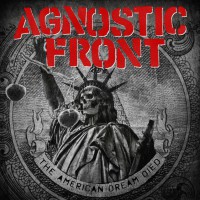 Cover art featuring a skull-faced, bullet-riddled Statue of Liberty. Check. Intro with sirens, gunshots and foreboding news clips. Check. Songs against police brutality and war. Check. Songs about unity, brotherhood and the hardcore lifestyle. Check. Songs about the good old days of hardcore. Check. The American Dream Died has every element necessary for a successful hardcore release. Of course, making a hardcore record is not an academic pursuit. It also requires passion. Lots of passion. Passion is something that Agnostic Front still seems to have plenty of.

Agnostic Front is a band that generates strong opinions. They are usually either loved or hated. Even if you hate them, you must respect them. With the possible exception of the Cro-Mags, no band has been more influential in the development of the New York Hardcore sound. Agnostic Front's early recordings, United Blood and Victim In Pain, are stone cold classics of the genre. Singer Roger Miret has done hard time. No one has more street cred than Agnostic Front. While their early records are celebrated, their more recent output has been a mixed bag. Later albums range from quite good to quite forgettable. Fortunately, The American Dream Died is a solid addition to their catalogue.

After the overly long intro comes the title track. The fact that Miret is a Cuban immigrant gives the song some extra weight. His family experienced the so-called American Dream first hand. Miret's voice has always been a bit of an acquired taste. His singing is more pinched and nasally than the full-throated roaring of many of his contemporaries. He sounds good here, his conviction overcoming any technical deficiency. The music is mostly thrash, with lots of double bass drum and even blast beats. It's usually very fast, with the expected breakdowns. Long-time guitarist Vinnie Stigma continues to come up with headbanging riffs. "Police Violence" is as relevant as ever, even if it feels a bit clichÃ©. How do you fault a band for being clichÃ© when they helped invent the very style that so many others are ripping off?

"Only In America" is a surprisingly heartfelt song about how poorly we treat our veterans. You will find it difficult not to chant along with "Test Of Time" and "We Walk The Line." A couple of the more straight-up punk songs are among the strongest on the album. "I Can't Relate" and "Old New York" are both catchy as hell. "No War Fuck You" and "Attack!" are primitive blasts of hardcore fury. The American Dream Died ends with "Just Like Yesterday," a nearly perfect Agnostic Front song. Punk and hardcore with a sing-along chorus. "Death before dishonor, all back through history/And just like yesterday, undying loyalty." It's delivered with total sincerity, and that's why it works.

Last year, Sick Of It All's Last Act Of Defiance was a pleasant surprise for many. It reminded us how good New York Hardcore can be when it is done well. The American Dream Died may end up being 2015's version of that. While the lyrics are a little predictable, this is almost always likable. Agnostic Front will probably not win too many new converts, but they will definitely feed the faithful. If you've ever considered a neck tattoo, you will love this.

Break Anchor: Van Down By The River