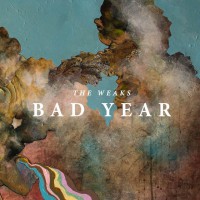 The Weaks have quickly shaken off the dull moments from their debut EP in 2014's The World Is A Terrible Place And I Hate Myself And Want To Die. This time around they seem much more focused but still very creatively free to roam as seen with their tongue-in-cheek banter as well as that Nirvana fascination. Philly continues to shine brightly in the realm of DIY indie and pop-punk and The Weaks are a great example of why their scene's something we should be placing a lot of emphasis on. Bad Year is a highly versatile album filled with snazzy singalongs that crank things up a notch but more so, it's a record that invites you and makes you feel part of their home.

The Weaks have cultivated a much more distinct musical style this time around. There's something here if you're a fan of Superchunk, Weezer or even The Sidekicks. But when they mix and mash everything together, it's a pretty sweet blend that comes off original and unique despite its influences. "Kick It" and "Nevermind" are a great combo to open with. They set the tone for the album as a guitar-oriented, cheeky trip. The latter's quite a blast especially as it feels like Bowling For Soup and The Offspring decided to jam out. Evan Bernard and Chris Baglivo's cult following will definitely appreciate what they've done here, as their writing style as well as the vocal textures they alternate with, make the record pop that much more. Even in the synth-filled sections, the guys find new ways to shake things up and it's these spots that cast a heavy spotlight on the growth undertaken from last year's offering.

The second half of the album kicks things into another gear as it's more aggressive and packed with heavier bits of grunge and '80s rock tones. "Black Box" is one of these songs that adds to the unpredictable element of Bad Year. And smartly so. It's hard to pin this album down by the time these tracks start to swing for the fences. They come together to show the musical genius and smarts of The Weaks as they conspire for something that's more than just arbitrary, catchy anthems.

They've got a lot to say and the closing tracks are embossed in these angrier musical patterns. Just count how many times you hear them say "Bullshit" in this half of the album. They sound restless but definitely, it's a kind of anxiety that makes for great music. "I Don't Wanna Be An Anarchist (Anymore)" epitomizes this (with some Menzingers attitude) through a series of guitar solos that Slash would be proud of and adds a lot of flavor to the record that's clearly based on an emotional set from guys who need, and not want, to make a statement. As "Frances Quinlan Will Have Her Revenge On Philadelphia" draws the curtains down, you're left with a smile on your face. It's probably the best song I'd direct someone to if they asked what the band was about. It's very snarky, parody filled, but still nods to their home and more so, the music scene in their town. It's a huge reminder how amazing this album is (bar one or two tunes that dragged) and also, to keep an eye out for the next Hop Along album.

Chain of Strength: The One Thing That Still Holds True