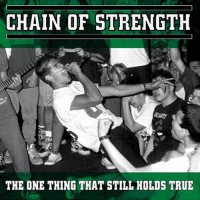 Chain of Strength were a straight edge hardcore band from Southern California that were active in their initial run from 1988-1991. The release The One Thing That Still Holds True represents their entire recorded output.

From the opening track â€œImpactâ€ to the mid-album masterpiece "True Till Death", and finishing off with the album closer "Best of Times, The One Thing That Still Holds True is a very solid release that packs a hard-hitting hardcore wallop that is over in just under 24 minutes. The album opens with the aforementioned mid-tempo â€œImpactâ€, but the remainder of the album is a nonstop punch of meaty hardcore that does not let up. The lyrical themes of the album are standard hardcore fare about unity, the hardcore scene, and straight edge, but they are executed in song exceptionally well.

While Chain of Strengthâ€™s existence may seem unexceptional, this release is not one to pass over, especially if you are into the â€œyouth crewâ€ style of hardcore that was championed by bands like Youth of Today and Bold. The sonic influence of Chain of Strength in particular can be heard in late-nineties youth crew revival bands like Ten Yard Fight, In My Eyes, and Carry On. Late nineties hardcore frontmen in particular seemed to emulate the vocals of lead singer Curt Canales. Perhaps Chain of Strengths biggest contribution to the hardcore lexicon is the term â€œTrue Till Deathâ€ in relation to straight edge. Because of this release alone, straight edge kids will be getting "True Till Death" script tattooed across their chests.