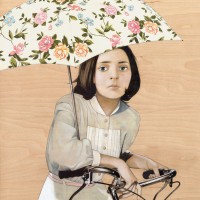 Sunshine State's new album Pour features Warren Oakes formerly of Against Me! on drums but happily that's not the biggest feature of the band. Pour is a fun, well written collection of folk-punk/pop-punk songs about drinking, having fun presumably by the beach, and the angst and regrets that seem to emerge with being twenty and thirty something and punk. If one of the biggest flaws of punk as a whole is that many songs of even good bands can blend together then Sunshine State has smartly avoided that by putting together a nice range of sounds going from quick and ramshackle (the thirty-second "Young" was clearly written to be yelled by a bunch of friends and it's awesome) to really surprising and epic.

For one, a few songs like "Friends of the Deceased" actually bring in synths and keyboards to augment the bigger feeling they're aiming for, something I definitely did not expect and was pleasantly surprised by. It's a really smart move and both feels like a nice experiment (recalling both Flock of Seagulls and Depeche Mode) and a great way to beef up an already strong song. There aren't a ton of bands who'd try something like this, so kudos, guys. All of the songs have nice sing-along hooks and lead singer Troy Perlman's voice sounds like a more melodic Jesse Michaels. Songs like "Sour Mash" and "We Discussed It, We Disgusted" have great, self-loathing/kiss-off lyrics and relate to an, ahem, inebriated state so they'll definitely have a following among beer-loving pop punks.

And yes, Warren Oakes' drums sound great as always-- he always was a strong drummer in Against Me! (that beat on "Don't Lose Touch" is a constantly moving monster) and the same is evident here. Overall Sunshine State is a solid punk band and they've made a very good album with Pour I don't listen to pop-punk as much as I did in my college years but this was an awesome burst of that mix of self-loathing, sing-along joy, and burbling drunkenness you can feel in the best of it.

Chain of Strength: The One Thing That Still Holds True