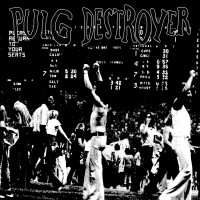 While the Los Angeles Dodgers trudged into Major League Baseballâ€™s 2014 postseason, ultimately losing in the National League division series, Puig Destroyer released their first full length, self titled album. The bandâ€™s name derives from Cuban outfield phenom, Yasiel Puig, and grindcore outlet, Pig Destroyer. It's not only a delicious pun, but a fitting one, as few baseball players take the field with such intensity and recklessness as Puig does in the confines of Dodger Stadium, matching that of the bandâ€™s styles of grindcore, hardcore, and metal.

Puig Destroyer takes the desolate notions often referenced in heavy music, and pairs them with the downside of being a multimillion dollar professional baseball player. Whether it be the pressure of living up to expectations bestowed upon you by columnists and newscasters, only to be criticized no matter the outcome, in â€œTake Damageâ€ and â€œTop Prospect;â€ or the tribulations of getting to, and staying in, the major leagues because of your antics on and off the field in â€œThe Road to Omahaâ€ and â€œWild Horse.â€ The frustration comes through by way of scratching, shouting vocals, a grand slamâ€™s worth of guitar distortion, and pops of metallic shrieks. It all taps into the mind of a player who has been condemned by fans, the media, and team hierarchy; that is where the raw, human element of a baseball themed band comes into play.

The focus is not only on Yasiel Puig, but speaks frankly about the annoyances created by fans and sportswriters alike. â€œNo One Cares About Your Fantasy Teamâ€ says what is on the mind of most baseball spectators, and non-spectators alike, your imaginary managerial skills donâ€™t matter, stop talking about your scoreboards and sleeper picks. â€œBatflipâ€ and â€œStealing Signsâ€ take on the unnecessary, often-debated issues surrounding baseball â€œpuristsâ€ obsessing over players adhering to unwritten rules and â€œrespectingâ€ the game. â€œTommy Johnâ€ embodies the twenty-first century pitching injury epidemic, players blowing their arms out from throwing so violently, requiring a historic amount of ulnar collateral ligament reconstructions. Throughout the albumâ€™s 20 tracks, itâ€™s clear, nothing irritating in regards to the world of baseball is off limits to Puig Destroyer.

Donâ€™t be fooled, this band was created as a joke by Thrice drummer Riley Breckenridge. The project is meant to be lighthearted and fun. Puig Destroyer teases your inner grindcore senses, it is monstrous sounding, loaded with the vocal patterns and instrumental stereotypes of the genres being played, the anger is felt in the delivery, but itâ€™s all in good fun. Maybe thatâ€™s what these extreme genres are all about, exerting so much energy about any subject so that the listener will give the music a shot, as long as it sounds good; and embrace it if the content speaks to them, jokingly or not. Being a 20 song, 24 minute album, Puig Destroyer goes through the often indiscernible grindcore motions to satisfy heavy musicâ€™s base audience. But, it also draws in the cross section of baseball fans for some Billy Beane calculated laughs.

Chris Farren: Where U Are [7-inch]