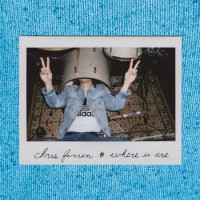 Chris Farren has taken time out from being a punk celebrity and dear friend to the stars to unleash Where U Are, a trio of songs recorded during Fake Problemsâ€™ Australian tour with the Gaslight Anthem. Itâ€™s a quick, fun listen that will surely satisfy fans of Farren and his prior releases. Apparently tossed off with a certain measure of spontaneity, the EP feels polished and complete, despite being very brief. Farrenâ€™s recent collaborations with Jeff Rosenstock also seems to have rubbed off on him stylistically, adding a satisfying dynamism and roughness around the edges to his music.

While certainly lo-fi compared to much of Fake Problemsâ€™ output, Where U Are hints that Farren is headed in a direction very much in line with that of Antarctigo Vespucci. Opening song â€œWhere U Areâ€ is an energetic song in the breezy, garage-dwelling vein of Wavves, and features as catchy of a chorus as youâ€™re likely to hear all week. â€œEvaporateâ€ at times sounds like one of the Cureâ€™s poppier songs, though the energy helps to keep things fresh and modern. The final song, â€œPermanent For Meâ€, features a definite change of tone, downshifting to a much more melancholy, introspective vibe. It is a solid, somber number that will leave you wishing there were more than three songs on Where U Are. And just like that, the EP is finished -- short but sweet, and leaving listeners wanting more, a reaction all great EPs are meant to evoke.

I see very little chance of fans of Antarctigo Vespucci or Fake Problems being disappointed by the three songs presented on Where U Are. It follows the trajectory heâ€™s been on in recent days, while tossing enough fresh elements into the mix to keep it fresh.

Restless Habs: No Way To Hide Your Tracks [EP]