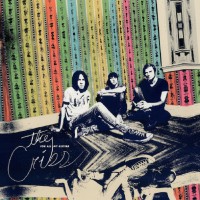 The Cribs have always been one of most tonally interesting Brit bands of recent times. From the hands-on influence of Johnny Marr (ex-Modest Mouse) to the Morrisey style of lyrical expression, there's always been something different that catches my eye with each album. When it comes to For All My Sisters, the three brothers have diluted their sound into an indie-pop piece of art. They end up crafting something loaded with a heavier-than-expected pop sensibility that's a shoo-in to draw a lot of radio airplay.

For All My Sisters is guitar focused and the dynamic string work kicks off from the opener and never lets up. Every single song is so distinct as they go from shrill to angular guitars to subtly grungier tones at times. When it comes to The Cribs here, if you're a fan of The Strokes, Arctic Monkeys, Oasis, Franz Ferdinand, Kasabian, Modest Mouse, The Killers or Bloc Party, you've got a track or two that you'll more than relate to. Tracks like "Diamond Girl" though are the dominant style -- lighter, psychedelic and oh, so catchy. That doesn't take away from the record's conviction at all, however.

The range on tap is a big plus, I'll admit. "Pacific Time" is edgier and heavier, which old fans would appreciate and it does tie in well to the buzzier tracks like "Mr. Wrong" and the lo-fi "Simple Story." The latter has a coarse garage vibe to it to throw back to their rough-cut days as they sing of Americana from the outsider's perspective. That's also something they don't lose here. This narration from the outskirts is another strong point as with a lot of their music. There's a lot of life and more so, distinguishable character, told from their words as each track is coated with a nice shell of variety. The pieces of reverb, the annoying feedback and the breezy summer feel to some tracks add a pretty intrigue to the album. "Pink Snow" is a perfect cap to the record as it melodically ballads its way into a distorted basement banger to leave you wanting more. It earns its praise via a Robert Smith style of vocals which really hit home for suckers for The Cure like me.

I wouldn't call For All My Sisters totally mainstream nor entirely accessible but it's definitely something that catches you off guard for some weird reason. And not necessarily in a bad way. It has some nifty underground elements to it and these unpolished parts mix well with the studio-perfect essence of certain sections of the record. A couple tracks too long, one or two tracks too bland but overall, it's another album from The Cribs that's more than worth a couple listens. A shift in musical direction? Yes. But one that has enough acknowledgement to their past to pass another stern litmus test.

Restless Habs: No Way To Hide Your Tracks [EP]

The Real McKenzies: Rats In The Burlap