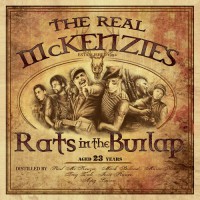 The cover of the new Real McKenzies album looks like the label of a whiskey bottle, and prominently proclaims to be aged 23 years. Formed in Vancouver in 1992, the band has been around for longer than most of their kilt-wearin' punk brethren. While The Real McKenzies' longevity is notable, their continued passion is what keeps them at the top of the Celt-punk heap. Rats In The Burlap is the ninth studio album from Paul McKenzie and his band of merry men. While Dropkick Murphys (formed 1996) and Flogging Molly (formed 1997) have embraced their Irish heritage, The McKenzies are Scottish and proud. Their sound is a combination of folk and punk. The songs are rowdy originals and traditional ballads. Electric and acoustic instruments compete for space in the mix with bagpipes. Lots of bagpipes.

The bagpipes are the first thing you hear at the beginning of the opening track, the upbeat "Wha Saw The 42nd." The next four songs, "Up On A Motorbike," "Who'd A Thought," "Midnight Train To Moscow" and "Lilacs In The Alleyway" are all impassioned and hard-driving. Even after more than two decades, The McKenzies still perform with a significant sense of urgency. This is not a band just going through the motions. Fortunately, they still seem to have an endless supply of drunken adventures to sing about.

"Yes" is the emotional centerpiece of the record. It's a song about last year's failed vote for Scottish independence. The subject matter may be difficult for Americans to wrap their heads around, but it's obviously very personal to Paul and the gang. The tin whistle leads the way on "You Wanna Know What." The band seems to be angrily confronting their naysayers on "What Have You Done." The sentiment is similar to Ian Mckaye's words from more than 30 years ago, "At least I'm trying, What the fuck have you done?" "Spinning Wheels" is about the band's nomadic, hard-touring lifestyle.

"Bootsy The Haggis-Eating Cat" is an old-timey novelty song, and doesn't really require repeated listens. "Stephen's Green" is a powerful song about a man facing execution. "The Fields Of Iverness" seems to be about the evils of living under a monarch. Sometimes the lyrics can be a bit tricky to understand. This song is also one of a handful where the guitar and bagpipes play off of each other. It's like a folksy version of the dual lead guitars of a band like Judas Priest.

"Catch Me" is a song that reminds us how vulnerable we are, and how much we need one another. Album closer "Dead Or Alive" is a potent ballad about the loss of loved ones. Unfortunately, it's far too easy for most to relate to. You can't help but wonder if the song is about Dave Gregg. Gregg was the early D.O.A. guitarist and long-time Real McKenzies member who died in 2014. It seems like there's been a lot of punk rock casualties lately, probably more than any of us know. The band tackles heavy and lighthearted subject matter with equal skill, and almost every song here is great. Rats In The Burlap captures a band that is showing no signs of slowing down, a band still at its peak. Listening to The Real McKenzies is like having a beer with an old friend. If you've ever enjoyed Celt-punk, or maybe even if you haven't, you will like this.

The Cribs: For All My Sisters