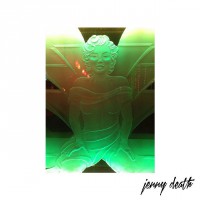 When it comes down to it, Death Grips is a group of talented shitheads. They are unpredictable, violent troublemakers. They stir the pot for no reason, and most of the time, their fans embrace it with open arms. Whatâ€™s cooler than saying â€œfuck youâ€ to a label by going behind their back and releasing it on their own? Then having the record label hate them so much, they were let out of their contract. How about using a dick pic as album artwork? This year, even after Jenny Death leaked, Death Grips threw the whole album up on their youtube page to be listened to freely.

But what about the music on Jenny Death (the second part of The Powers That B)? After last yearâ€™s niggas on the moon (the first part of The Powers That B) and January's Fashion Week, arguably the groupâ€™s weakest entries and the least experimental, this album is all over the place. But itâ€™s also a return to form for the band, if you can call anything theyâ€™ve done form. Fashion Week, in particular, could not have been the group we know because the instrumental album lacked the bandâ€™s heart. Without MC Ride, the lineup felt incomplete. Sure the music was interesting, and Zach Hill was as impressive as always, but we also needed that angry touch of humanity.

On Jenny Death's single, if you can call it that, we get more of Ride than we bargained for. â€œOn GP,â€ deals with death, specifically suicide. Itâ€™s safe to say all topics Death Grips touches upon hold a significance in their lives, but this is next level. â€œLast night, 3:30 in the morning, death on my front porch. Can feel him itching to take me with him. Hail death, fuck you waiting for?â€ is haunting, to say the least. Itâ€™s a great song, and connects on a more personal level than some of their other tracks.

Letâ€™s see. What else? I'm trying not to use the words rap rock here. Opener â€œI Break Mirrors With My Face in the Unites Statesâ€ is an aural assault that wouldnâ€™t feel out of place on their debut. â€œWhy a Bitch Gotta Lieâ€ feels like a heavy â€œIntergalactic,â€ while â€œThe Powers That Bâ€ could pass for an early 2000s nu metal song. Jenny Death doesnâ€™t limit itself to the music youâ€™d expect to hear from rap or rock or electronica. This is a group of guys who have a solid grasp on sound as a whole, always opting for the most intense experience, whether that involves their go-to hardcore sound or something like album closer and accurately titled, â€œDeath Grips 2.0.â€ This title, more than anything, leaves us unclear of the bandâ€™s future.

What we really want and need from Death Grips is unpredictability. Theyâ€™re a band constantly on the brink of internal combustion and their sound represents that. It speaks to the credibility of the musicians, particularly Zach Hill, that a band this reckless can have such a committed group of followers because even at their worst, itâ€™s something fresh.

So where do we go from here? Death Grips has a tour lined up for later this year, but will they show up? Will they instead cancel the whole thing? Or will it be some sort of art project designed to piss everyone off? Who knows? Hey, at least we got another album. But other than that, weâ€™re guaranteed nothing, which is exactly why we keep coming back.