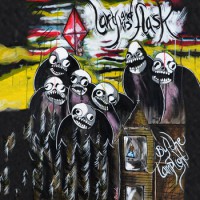 Larry and His Flask

Larry and His Flask's By The Lamplight kicks off right where 2011's All That We Know left off with a song called "Pandemonium." It's a beautiful, three-piece harmonies and energy, raw energy! Two great lyrics from this song are "..maybe we could perhaps have friends instead of trends.." and"..change instead of chains.." really hit home. The last 45 seconds turn into a "lift-your-drink-high-into-the-air-and-sing-along" na-na-na anthem. A nifty guitar riff brings us into "Out of Print", complete with twangy picking, Johnny Cash-like bass lines, and a clever little guitar solo. The fast-paced madness slows down a touch with the next offering on "Barleywine Bump,"which is- a heavy, head-nodding two-step with some effects thrown on the vocals, and a huge, multi-layered chorus at the end. Boom, just like that, the drums kick us into "The Battle For Clear Sight". Subtle, building verses swarm like bees in a hive. A new voice is introduced in this song, one of higher pitch that plays nicely off of frontman Ian Cook's smooth, deep growling pipes. Acoustic guitar welcomes us to "Log, Heart and Ash", which has possibly my favorite melody on the album during the pre-chorus. Track six brings our first acoustic ballad "Gone From You". This doesn't only serve as a place for the listener to catch their breath, it also happens to be a very beautiful, though somewhat sad, song. When the band kicks in for the last chorus- chills.

Fear not adrenaline junkies, rippin banjo kicks some caffeine into the metronome and introduces "Home of the Slave". Remember my Johnny Cash reference? This song mentions Folsom Prison ("I say Fuck Folsom Prison...") and has somewhat of a similar lyrical structure to said song. Banjo and guitar each get respective solos in this one. I would love to see this song played in a barn down in Georgia to a bunch of whiskey-drunk punks. "Some Cruel Twist of Fate" slightly slows things down again. "From fetching the shovel, to digging her tomb, our unborn child still lies in her room..." The verse has a relaxed, groovy feel to it, and the build in the prechorus with the aforementioned lyrics provides many an eargasm. The ending of "Cruel Twist of Fate" melts away into a tune of similar tempo and feel, "Justice and Justification". The quick paced, almost frantic "Muffled Thrums" is next. Harmonies of both the vocal variety and stringed variety (banjo+guitar harmony solo!) set the track apart from the rest. Track eleven brings us our second acoustic ballad - "All That We've Seen". This is a slow-paced strummer of a tune featuring only vocals and acoustic guitar, with a layer of beautiful violin and horns thrown in at the end. "Tides" closes out the album in typical Larry and His Flask style. This song culminates with a really cool sounding breakdown. Skillful guitar work not so much seen on the previous album really shines here.

Sweet Jesus: You Destroy Yourself