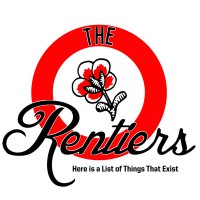 Scientifically speaking, Joel Tannenbaum is a starfish. No wait, a hydra. Thatâ€™s more evocative. Point is, you cut down one of Tannenbaumâ€™s bands, and two more sprout up in its place. So while I continue to mourn the passing of Ex Friends in my own cripplingly personal way, I also rejoice at the emergence of Tannenbaumâ€™s latest projects, Ghosts in the Graveyard and the Rentiers.

Ghosts in the Graveyard can be glimpsed at in all their ectoplasmic ecstasy on the forthcoming Punknews mixtape (hyperlink for synergy!), but the Rentiers do one better with Here is a List of Things That Exist, a beautifully crafted EP boasting four folk-tinged rock tracks and a handsomely painted flipside. This record is nice to gaze upon. But is it nice to listen to this record?

It is nice to listen to this record.

Given his discography, itâ€™s hard not to think of Rentiers in comparison to all of Tannenbaumâ€™s other bands (and his friendsâ€™ bands). So letâ€™s do that! Rentiers feel like a palate cleanser after Ex Friends. Gone are the throaty shouts and the super duper fast tempos in favor of clean singing andâ€¦ OK the drums are still kinda fast, courtesy of Mikey Erg. Tannenbaumâ€™s harmonies with Chumpedâ€™s Anika Pyle are splendorous and welcoming. Weâ€™re talking Evan Dando/Juliana Hatfield territory here. Theyâ€™re especially effective together on the chorus for â€œThe Legend of Molly Pitcher.â€

Rentiers are certainly a poppier new direction, although opener â€œStories of Adamâ€ and â€œI Can Picture Margaret Stackhouseâ€ certainly share some acoustic country origins with Brian McGee, Tannenbaumâ€™s bandmate in Plow United. But, perhaps aided by Tyler Purselâ€™s production and keys, thereâ€™s definitely an element of Stiff Records power pop bubbling in there as well. Point, Here is a List is rather catchy.