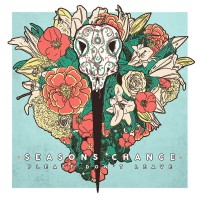 Seasons Change has a firm grasp of their sound. They have no problem pushing the limit and they do just that on their debut album, Please Don't Leave. Filled with riffs and explosively fast songs, this album took me by surprise. There are so many bands nowadays who fit into the mold and while Seasons Change haven't quite broken that mold; they rearranged it and made themselves comfortable.

While their sound is reminiscent of more recent acts like Neck Deep, Knuckle Puck, and State Champs, Seasons Change manifests nostalgia from the early 2000s pop punk scene. Please Donâ€™t Leave is a raw depiction of the current state of the music scene. The songs blend very well together but are unique in one way or another. Of course each song is filled with double-time verses and catchy choruses, but the way the band crafts around their song structure with intricate riffs and crunchy rhythm is what separates them from the rest. The bands reliance on its lead guitar is an extremely strong factor. Both guitars are mixed incredibly well, like on â€œHope This Stainsâ€ where the lead guitar carries the song without drowning out the other instruments.

â€œNeed To Knowâ€ is a classic nostalgic song with a modern touch. The song could easily have been released in 2005. Anthony Robles vocal range adds a lot of feeling to the lyrics and vibes of certain songs. His vocals are extremely clean and match the feeling of the music. He uses his high-pitched vocals for catchy choruses on songs like, â€œSick Of Itâ€ and â€œStraight In The Heart.â€ If Parker Cannon didnâ€™t sound so angry and gritty, he would sound like Robles. His vocal flow is similar to Cannonâ€™s on many songs as well.

â€œThe Reasons Whyâ€ is where the lyrical content shifts out of its realm. The singer reflects about the loss of someone he didnâ€™t know and the thoughts that are stirred up with death and tragedy. The vibe of the song matches the equal emotion and the story unfolds accordingly.

The songâ€™s closer drives the album home. It takes every element of the album and utilizes them to put together the perfect ending. â€œNot Sorryâ€ sets forth to prove that Seasons Change is a solid band that will undoubtedly be important in some way, shape, or form.

While thereâ€™s no question that Seasons Change sound matches those of itâ€™s contemporaries, they have a lot more feeling than the average pop punk band. Season Change proves with Please Donâ€™t Leave that even though the wheel isnâ€™t exactly being reinvented, every song is filled with the originality formed from nostalgic influence.