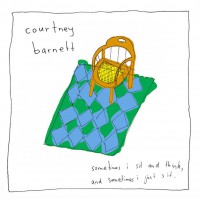 Apathy is easy to write off, unless, apparently, itâ€™s Courtney Barnettâ€™s. Her new album Sometimes I Sit and Think, Sometimes I Just Sit is a lyrical journey into the singerâ€™s psyche. Her detail brings even the most mundane topics to life.

Sometimes I Sit and Think, Sometimes I Just Sit is a pretty damn great title for this group of songs. It accurately sums up the lackadaisical feeling of the whole experience: wordy but not necessarily saying all that much. Barnett writes exactly what she sees. Sometimes I Sit can, at times, leave us feeling a bit voyeuristic. Something like attempted suicide can be just as important as sitting home alone or swimming, in Barnett's mind. The beauty is she leaves everything open ended, with her voice often acting as the equivalent of a shrug.

Courtney Barnettâ€™s life is ordinary, which is to say, relatable (until this record blows up.) She notices all the same things we see and think but maybe never register: â€œI lay awake at three, staring at the ceiling. It's a kind of off-white, maybe it's a cream?â€ Or: â€œIt's got a lovely garden, a garage for two cars to park in or a lot of room for storage if you've just got one.â€ Her specificity is what brings us back for multiple listens. Rarely can movies paint pictures as vivid as â€œAn Illustration of Loneliness (Sleepless in New York)â€ or â€œDepreston,â€ the best song on a great album. As â€œDeprestonâ€ suggests, the whole album has a melancholy feel, but really, the penultimate track â€œKimâ€™s Caravanâ€ is the only time where it reaches bleak.

The Double EP: A Sea of Split Peas, Barnettâ€™s first collection, was explicitly not considered her debut album. Though the songs were great, there was less glue holding them together. Sometimes I Sit, on the other hand, is a perfectly cohesive unit. Even though the topics are broad, Barnett has delicately woven all aspects together, creating something truly beautiful.