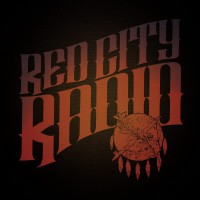 To start, Red City Radio has gone through some significant changes as a band since Titles came out. They played their first headlining tour last year, Paul Pendley left the band on amicable terms, and they switched from Paper + Plastick Records to Staple Records to release their new self-titled album.

Now I have always maintained that Red City Radio has some of the best guitar solos, use of guitar octaves, and backing harmony vocals in the punk scene (comparable to that of Bad Religion). You still get a lot of those aspects of that â€œolderâ€ Red City Radio sound with this new album as well as their big build-ups to anthemic and powerful choruses. However, it would be a bit naive to think that the band would continue on the exact same musical path they have been on after all these changes have occurred. Just by comparing this albumâ€™s track listing to the bandâ€™s previous releases you can see that the names of the songs are short phrases or just one word, rather than long, random phrases.

Right off the bat, the most noticeable change made for Red City Radio is that Garret Dale has taken over lead vocals full-time on all ten tracks on the album. We still get that gruff and raspy voice that we Red City Radio fans have become accustomed to and have loved since the beginning. There are some significant differences musically though. A lot of the songs are not as aggressive as the ones on their previous releases. They have slowed to a more mid-tempo style. Some of them are almost ballad-like. You definitely get that sense in the song â€œTwo Out of Three Ainâ€™t Rad.â€ Itâ€™s a very heavily palm muted song that has a mid-range rhythm. It is also sprinkled with blaringly high-pitched guitar riffs that only Red City Radio could pull off. They lyrics in the song especially do show signs of reflection and maturity, too. This very evident in the lyrics in the chorus where the whole band sings, â€œTo each his own/Everybodyâ€™s got their own opinions.â€

Another one of the more mid-ranged tempo songs is â€œLet Me In.â€ Of the ten songs on the album, this one has some of the most remarkably great vocal harmonies. If I were to call any of the songs on this album a ballad this would be it. The band truly wrote some amazing guitar work on this track as well. There is great use of harmonics, bends, and slides in the beginning of the solo and then the second guitar comes in to harmonize with the other to form an explosive finish, which leads in to the next verse.

Now just because all of these changes have been made, doesnâ€™t mean that Red City Radio has moved on completely from their original sound. Iâ€™ll be very blunt. â€œIn The Meantimeâ€¦â€ is one of the best songs the band has written. Itâ€™s a classic aggressive Red City Radio song. It starts out slow, but it continually builds up speed and vocal complexity as the song progresses. The pre-choruses build up tension mainly due to all of them members singing increasingly higher and louder while harmonizing. Then all of the instruments stop, except for one distorted guitar note bend, which quickly leads into this blast of energy and aggression in the chorus. At this point the band sings the lyrics â€œI just want to get high!/ I just want to get high and play my fuckinâ€™ guitar!â€ at the tops of their lungs. Again, their guitaristsâ€™ use of octaves is top notch in this song particularly. They add a ton of energy to the riffs, compared to just using standard power chords. Granted, there no wailing guitar solo, but having one on this track probably would have broken up the song to the point where it would have sounded a bit awkward or have been over done. So in this case I think it was smart to leave it out. They really hit it out of the park on this one.

â€œElectricityâ€ too, is a much more traditional Red City Radio tune. There is a lot of use of distorted guitar octaves, big, tension-filled build-ups, and awesome vocal harmonies. The mixture of the swiftly played guitar riffs and the animated vocals makes for this juggernaut of a chorus that hits your ears without mercy. This time the band did include one of their signature guitar solos where the lead guitarist plays drawn out bends, intricate slides, and fast pull-offs.

In all honesty, after the first listen I wasnâ€™t sure what I thought of this album. After the second and third listens I realized that I enjoyed it very much. So I would have to say that Red City Radio definitely a grower. It is very much a transitional piece that contains a mixture of the bandâ€™s older style and the newer, mid-tempo material. Yes, itâ€™s different, but if you give this album the right amount of time to settle in thereâ€™s more than a good chance that the majority of you will enjoy it. So definitely give a shot.

Note to my fellow vinyl nerds:
750 copies of this album were pressed on orange/black marble vinyl.

Bad Religion / OFF! / The Interrupters: Live in Hollywood

Good Riddance: Peace In Our Time