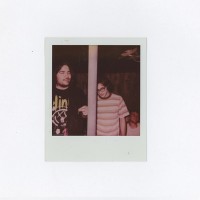 There's a lot of indie coming out the woodwork these days. Some bands shape the sound and make it their own, others just churn out some regurgitative material that can't help but feel bland. Personally, it feels like saturation's creeping up in the marketplace but then, a band like Pope comes along and shakes your jaded ass up. It's good to have the bits of cynicism removed, especially if you're an addict like me for the genre, and Fiction is a great piece of work to inspire and urge you to keep the faith. It's even sweeter if you're like me, ingesting the band for the first time.

Pavement comes to mind when the majority of the album sinks in. There's a heavy garage/demo aura that works so well here with mixed vocals hinging on the eclectic guitars, no doubt the fulcrum of the album. From the aggressively crafted "Let Down" to the fuzzy, distorted "Gearbear," you get an early sense of how Pope's got a handle on things. They mix it up nicely with the latter's hazy, noise pop grasping at you strongly. When it reaches you, you can't help but appreciate how vulnerable Pope shapes up. There's even atmospheric grunge layers tossed in here as well as nods to Queens of the Stone Age. Early on, they lay down a really solid mosaic.

For some reason, I see older heads relating to these tunes as the tracks feel more composed, restrained and yes, at times a tad shoegaze but they don't sacrifice any of these for energy though. You feel that comprehensively throughout Fiction. "Animal" has that Brit-pop flair to it a la a feistier Interpol and brings further range to the record. The exposed feel comes at you even harder on the reverb-laden "Will Taylor" which somehow finds a way to work the closing section of the record into the picky "Parties," which in itself is a tremendous tribute to the plucky '90s emo house-shows. Cleverly disguised in its production but so rough, so raw and so real. The album does feel one or two tracks too long but overall, it's a great introduction to a band that seems to have their headspace right. The songs that don't resonate really are forgettable but the ones that stick are well worth the pickup.

Good Riddance: Peace In Our Time

Skinny Lister: Down on Deptford Broadway