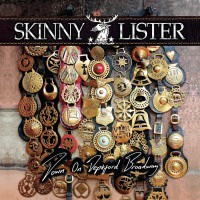 Iâ€™ve always had a little obsession with London. A few years back, the obsession grew enough to convince me to study abroad in the city, digging myself deeper into student loan debt, but forever cementing England nostalgia in my brain. Forget the dark, crime-ridden hellscape described in Gallows' Grey Britain. Maybe Iâ€™m a little revisionist, but the London in my head is an enchanted metropolis with magical history around every corner, charming little pubs with local eccentrics, and neverending pints with friends. Apparently, Skinny Lister lives in this same sort of London. The British six-piece plays whimsical folksy numbers that are sing-along, glass-clinking, danceable barroom stompers -- with accordion to boot. Down on Deptford Broadway, the bandâ€™s second full length, is a 42-minute trip through the London of pub lore.

The album kicks off with a near-sailor chant, â€œRaise a Wreck,â€ that sets the bar for the gang vocals to come for the remainder of the album. Thereâ€™s not a track to be found without at least a little whole-band-singing-in-unison. â€œWreckâ€ is followed by â€œTrouble on Oxford Street,â€ which is a microcosm of the entire album: itâ€™s got a little adventurous edge to it, but for the most part, itâ€™s a polished, energetic folk song with a chorus that sears itself into your head. There are a few emotional songs that bring the energy level down a notch (â€œWhat Can I Say,â€ â€œThe Dreichâ€), but I can still see a bar crowd hoisting their glasses in unison for the chorus of either. The biggest variation between songs comes by way of the two vocalists, Daniel Heptinstall and Lorna Thomas. The binary attack is a welcome trait, as both are strong singers, with rich voices that can carry the quieter emotional moments while hitting the strong leads of the spirited parts. Plus, it's nice to see both genders so evenly represented on an album like this.

Though the musicâ€™s very British in every obvious way, thereâ€™s also a clear Irish twist to some of the songs. With folksy bar numbers, itâ€™s just hard to avoid the emerald influence. On songs like â€œBonny Awayâ€ and â€œBold as Brass,â€ Skinny Lister sounds almost like Flogging Molly Lite. But ultimately, any folksy punkness is diminished by the bandâ€™s clean-cut melodic sheen. If you think (early) Against Me! or (early) Apologies, I Have None when you hear folk-punk, youâ€™ll be sorely disappointed in Lister. Label mate Frank Turner might be a bit closer in sound, but even he seems gritty in comparison. On certain songs, I can even hear a likeness to that Of Monsters and Men hit from a while back. That may seem like an insult, but itâ€™s not. Skinny Listerâ€™s just got a way of turning every folksy song into a radio-ready near-pop rocker with plenty of "hey"s and "whoa"s.

Down on Deptford Broadway is a seminar in the folk sing-along anthem done well. But every song on the album is a well-done folk sing-along anthem. Thereâ€™s a range that spans upbeat pub rouser to mid-tempo, emotional pub rouser. Itâ€™s an extremely consistent album; whether that consistency becomes grating will most likely vary listener to listener. Either way, itâ€™s worth at least a listen.