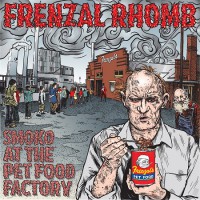 In 2011, Australian punk rock veterans Frenzal Rhomb pulled off a feat that sailed right below many a radar: they released their very own Everything Sucks. Released almost twenty years after the bandâ€™s formation, Smoko at the Pet Food Factory is a late-career home run, with an energy, vigor, and musicianship that most young bands in this style of music can only dream of. The songs come banging out of the speakers fast and furious, anchored by relentlessly tight drums, shredding guitars, and singer Jason Whalleyâ€™s sense of wit.

While still playing the Epi-Fat sound that brought them relative fame in the punk world during the 90â€™s, Smoko at the Pet Food Factory feels more mature, more in control, and more like a display of mastery of the skate-punk craft. Before this album, Frenzal Rhombâ€™s silly side felt like it often overshadowed their music; however, Smoko perfectly balances humor with technical proficiency and hooks aplenty. Sure, the album still opens with a song about a bird attack (bet you never thought youâ€™d be screaming â€Magpie! Seagull! Ibis!â€ in a mosh pit), but the music rips from start to finish.

Recorded in Colorado with Bill Stevenson producing, this album sounds like a band that grew up listening to the Descendents, and Stevensonâ€™s touch is perfect. The guitars sound bright but heavy, the bass chugs just below the surface, the drums explode with an overflow of energy. Not enough can be said about drummer Gordy Formanâ€™s work within this album; on Smoko at the Pet Food Factory, he makes a strong case for being one of the very best drummers in punk rock. He shreds the drums so hard and at such speed that itâ€™s jaw-dropping.

Smoko at the Pet Food Factory is also one of those albums that you can listen to all the way through without skipping a track. â€œMummy Doesnâ€™t Know That Youâ€™re a Naziâ€ and â€œKnuckleheadsâ€ feature Whalley at his most angry lyrically, while â€œJust Because Itâ€™s Soap Doesnâ€™t Mean Itâ€™s Cleanâ€ and â€œBack to the Suburbsâ€ are a couple of the best songs on the album. Frenzal Rhomb does well to well to pay tribute to the style of music the Descendents invented, while transcending the style and making it their own. Meanwhile, â€œDearest Friendâ€ and â€œMetrognomeâ€ have enough of the signature silliness Frenzal Rhomb are known for to make you smile. Thereâ€™s even a song about partying with the bass master general himself, Karl Alvarez.

For those with a need for speed within their punk rock, Smoko at the Pet Food Factory is surely a modern classic. How it didnâ€™t register more thoroughly with listeners here in North America I donâ€™t understand, but if 90â€™s Fat and Epitaph bands are your jam, give Smoko a listen. You wonâ€™t be sorry.

Skinny Lister: Down on Deptford Broadway