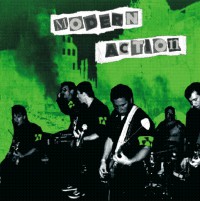 Modern Action play two minute punk rock songs with memorable hooks and memorable lyrics. The choruses are almost always catchy, but they never slip into the dreaded realm of pop-punk. The five piece band rips through the ten tracks on Molotov Solution in less than 23 minutes. There are no pretentious intros or extended guitar solos. There are only good, upbeat, straight forward songs. Opener "Pressure", features the dead-pan lead vocals that run throughout the album. "Self Destruction" has an interesting vocal interplay. It's like if the Angry Samoans were influenced by The Monkees. If you weren't confused enough already, there's also a song called "Modern Action". The title track, like a few songs here, is vaguely political. It feels more like mischievous teenage anarchy than deep revolutionary thought.

The general tone is more one of boredom or dissatisfaction than anger. "Degenerate" and "Problem Child" exemplify the band's self-deprecating nature. Truthfully, there's not a dud on the record. Molotov Solution is simply enjoyable, energetic punk that will make you want to move your body. In a world where punk has gotten too depressing and takes itself way too seriously, this record reminds us that punk can be and should be fun to listen to. It's not clear if Modern Action the band is still around, but this record is still available. Grab one while you can.

Burning Love: Down So Long [7-inch]