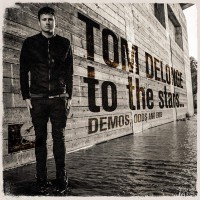 Tom Delonge, we got beef. I was into the alien stuff, I stuck by you through Angels & Airwaves, and I think this just might be the line. Demos, Odds And Ends is such a ploy, itâ€™s not even funny. If thereâ€™s any possible belief that these songs were written for Blink, then Iâ€™m glad Skiba is in good hands. So with that in mind, letâ€™s get started.

Quite possibly the most annoying thing about this piece of work is that it doesnâ€™t sound like demos for Blink-182 nor Angels And Airwaves, bearing the question, where did these demos come from? The songs certainly seem like Odds and Ends, but more something that shouldâ€™ve been kept on a hard drive, unmixed, unmastered and most importantly, not released on vinyl.

There are certain songs that are particularly strong in this jumble though. â€œSuburban Kingsâ€ has an original melody with a smooth progression. â€œAn Endless Summerâ€ can pass as an AVA demo but also maintains a certain melodic clarity in the careful riffs Delonge uses. This is the Tom Delonge we know, or the one as we know now.

In what Tom Delonge might think is a return to form is a downright catastrophe on â€œGolden Showers in the Golden State.â€ Not only does the riff sounds like he rearranged the opening to â€œFirst Date,â€ Delonge delivers crude lyrics that arenâ€™t remotely funny and seem downright sad. Tom posted the lyrics to this song for Blink a couple years ago, but out of all the songs to revive? â€œYou can take a dump on my chest if it s okay/ just to take a piss in someones mouth when youâ€™re away,â€ itâ€™s like Delonge tried way too hard to duplicate the Mark Hoppus written classic, â€œHappy Holidays, You Bastard.â€

While Iâ€™m glad Tom decided to release material other than Angels And Airwaves, it feels half assed and scrapped together. Perhaps thatâ€™s what the album is supposed to be, but the songs still arenâ€™t impressive. From the wise words of parents all over the world I have just one thing to say to you, Tom: Iâ€™m not mad Iâ€™m disappointed.

Burning Love: Down So Long [7-inch]