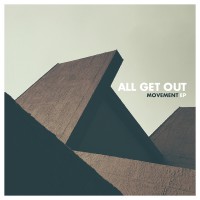 Nathan Hussey's one of my favorite frontmen in modern rock. His delivery, earnest lyrics and vulnerability as a storyteller/singer all remind me of Andy Hull from Manchester Orchestra. The way his words comply with life's tragedies was what made The Season in 2011 and All Get Out's 2008 self-titled resonate. If All Get Out's music focused on a single overarching theme, it's the process of growing up: fumbling for connection, finding oneself, feeling out the ways human beings do and don't settle into their own skin. Movement is another thoughtfully worded coming-of-age story, soundtracked by liltingly sweet and impeccably constructed guitar riffage that drives Hussey's messages home like nails. The record feels like the little brother to Manchester Orchestra's Mean Everything to Nothing and that in itself, is a major winning point for me.

Hussey's yells on "Orchestra" are in stark contrast to its guitar-driven rival in "Sans" but what's most alluring is how the former is pensive, broody and grimy while the latter's melodic and laid back. This duality is a prime example of the wrenches AGO loves throwing in the wheels. Hussey's narrative has changed a lot though which I assume came with more of his solo exploration and after Mel Washington left AGO. He probably realized that he can only credibly sing of youth in the present tense for so long. So for Hussey, all those big emotions of early adulthood -- the inflated meaning of tiny gestures, the hunger of long-distance longing and the rifts and cracks in relationships -- have naturally given way to more muted and nuanced songs about the many rebuilding processes of early middle age. The theme of drifting apart is so well brought out here under dynamic, driven guitars and thumping percussion. Every swell feels like a big, deep breath coming up to the surface.

"Balance" is yet another heavily influenced Manchester Orchestra tune and given how close Hussey is to the band and label, it's no surprise. His voice fragments at just the right intervals and at others, it feels so precious. His delivery's so ceramic but sensibly shifts when he needs to convey more emotion and unbridled passion. There's a lot of self-repair evident in his words when he shrieks and definitely bodes well for the future. It's a lot of what made AGO stand out in the past but with new tricks added in with a busty rock presence. Compared to its predecessors, Movement as an EP feels sparer yet not simpler, with a muted quality to match the aggressive pieces predominantly echoing on the record. The self-titled track's a catchy thud that reiterates how indie, accessible and mainstream Hussey can be as well, chronicling with a fair amount of specificity the journey of Hussey musically from loner to ensemble. This track is much cleaner as isn't tarred with heavier modern-rock frames. For some reason, this feels polished with some Evan Weiss.

These five songs work best when they're contextualized in literal detail. Why? Well, it helps to make the tunes more of AGO's and less a reminder of what Manchester Orchestra did in the past. Sorry for all the references but really, the comparisons are highly obvious. Not necessarily a bad thing but it could help detract from the band's identity. Whether it's a love story gone wrong, this earmarks another tuneful dive into the glum and immediate aftermath of parting. What comes next, most likely, is the blush of renewal that follows so many doldrums of mid-stage adulthood. After all, as long as we're alive, we never really stop coming of age, and All Get Out know that. I'm perfectly fine enjoying the ride as they share their takes on this.