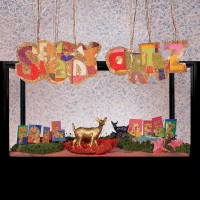 Sadie Dupuis makes songs for the losers, the underdogs and the failures. Now with a new sense of urgency and maturity! Maturity, of course, is often a four-letter word within the punk community, as it usually signifies a slower, much less fun direction. But Foil Deer, Speedy Ortizâ€™s third album, is the exception to that rule. Sure, itâ€™s a bit moodier but itâ€™s also much tighter, or what natural but major progression sounds like.

While 2013â€™s Major Arcana was an enjoyable record, it displayed the markings of a band finding their footing. But now Speedy Ortiz has harnessed that '90s indie rock they love oh so dearly to create one of the best records of 2015 so far.

The album moves like a story, beginning with the old Speedy -- lyrically impressive but with an overall feeling of uncertainty. The lead single, â€œRaising the Skate,â€ has that poppy feel to it, but as soon as Dupuis asserts herself, â€œIâ€™m not bossy, Iâ€™m the boss,â€ itâ€™s clear things have changed. From there on, she is in control, whether or not sheâ€™s ready for it. By â€œDot X,â€ her snarl is reminiscent of Fiona Apple, blood dripping from her lips as warning. She has all the confidence and is out for revenge. â€œDonâ€™t ever touch my blade, you fool,â€ she screams as a woman scorned.

Musically, the album follows the vocals all over the place. Speedy Ortizâ€™s guitar lines have always been impressive and voices of their own, but now theyâ€™re allowed to be more expressive. â€œPuffer," the album's turning point, takes the band into territory never explored before. It's a haunting song and sounds nothing like the rest of the album. Itâ€™s fun to hear the group try something new, even if it's darker electronic stuff. But don't fret, by â€œSwell Contentâ€ theyâ€™re back to themselves. Intertwining guitar and vocal melodies come together full force at â€œMy Dead Girlâ€ -- also the best use of Dupuisâ€™ MFA in poetry. Everything builds to its chillingly beautiful chorus. It represents who Speedy Ortiz is at its absolute best.

Speedy Ortiz shows plenty of audible hope among the standoffish warnings. They feel like the musical embodiment of too much coffee during a terrible hangover. Theyâ€™re frantic and anxious, but their bark is worse than the bite. They donâ€™t make music for everyone, no matter how relatable the pain is. â€œI was the best at being second place, now Iâ€™m just the runner upâ€ acts as their mission statement. There is always the need to keep the beauty of their music hidden behind the indie grunge they worship. Foil Deer is for those of us who want to dig for it.

All Get Out: Movement [EP]