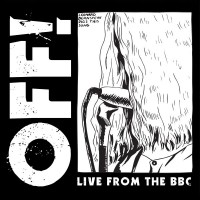 Without question, the initial spark of excitement surrounding OFF! had to do with their â€œhook,â€ if you will: Four punk rock veterans getting together and blasting out first/second wave West Coast inspired punk rock, many songs of which are about how the frontman hated a certain former bandmate. Thatâ€™s a great way to get people interested, but it all would have amounted bupkis if the band didnâ€™t destroy live. In fact, the band likely faced a higher barrier to acclaim because of their pedigree and because they were older dudes. Punk is, after all, often considered a young man's game. (I disagree with that, mind you). Now, to be fair, the guys in OFF! arenâ€™t ancient, but theyâ€™re no spring chickens either. And to put it bluntly, live, the band is competing with bands half their age.

Live from the BBC exemplifies why OFF! is still being saluted by the OG punk rockers and the hipper, more current, music scensters. Packing the release with a hefty dose of songs off 2014â€™s Wasted Years, the band tears into the tunes like a great punk band should. The songs are faster, more frantic, and frankly, a little sloppier than the studio counterpart. But, itâ€™s in this slight sloppiness that allows these tunes to really come to life in a live setting. The explosive parts are really explosive and, quite fittingly, it constantly feels like the band is about to fly off the rails into disaster- though they never actually do.

Keith Morris does not age. (Not to keep bringing up the bandâ€™s age, because frankly, the bandâ€™s sound has an agelessness to it. These guys could be 16.) He sounds as fiery and as nasty as he ever has, and itâ€™s sort of safe to say that heâ€™s in his prime. While so many other punk vocalists just scream at volume 10 all the time, Morris has mastered the art of fluctuation. He wavers between his lower, dustier sound and his jagged scream, which adds punch and a true earnestness to his performance. And of course, Morrisâ€™ last minute ad-libs are priceless. One feels as though this isnâ€™t so much a performance as an exemplification of self.

The band, meanwhile, are practiced, but not perfected. With punk music, there is always the threat of being over prepared- songs played so well that they loose authenticity and excitement. Not so here. The band kicks out those dynamic riffs, growing in intensity across a songs one minute running time, speeding towards destruction, when they finally hit oblivion at the end. These tracks are riveting in their energy and unpredictability. This is why OFF! is one of the greatest punk bands of all time.