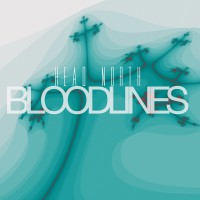 In every indie/emo record I encounter, I always look for a sense of hope and home. Some bands do find this a challenge and I'll admit that a lot of the criticism from my part does stem from how I feel on any given day. Some days up, some down. But there are some records that no matter what, will always elevate you. And Head North registers as a pleasant surprise in that bracket. Having shifted from the prototypical pop-punk sound of old, this two-year old unit have really done well to craft a smooth alt-rock six-tracker that'd simmer well for fans of Have Mercy.

A lot of the dynamic on Bloodlines hinges on the guitar interplay throughout which dances in between twinkly, spacey and emo and fuels how string-driven the album is. There are a lot of soft-to-loud crescendos throughout, which I admit could have been reduced, but it really doesn't harm songs like "Brave Hands" and "The Planet." These tracks embody a beautiful essence which tracks back to the songwriting prowess and raspy vocals of Brent Martone.

Shrieks of angst to softened sad notes add layers of versatile energy on top of passion, which outpours at every turn. Think of Andy Hull, Nathan Hussey and Jon Simmons. There's a lot of sentimentality and emotional complexity the walls of guitar lines and frenetic drums, which allow him that canvas to paint his emotions on.

"The Path" further shows their growth from their 2014 material as it's anchored in a dirtier, edgier feel similar to Simmons' Balance and Composure. If they cut loose like this more often, Head North will really be shaking doors down. As "Windowless" winds things down, it feels like a breather. Bass-hectic and something that sounds straight off an Evan Weiss catalog. And there's not a single complaint in that. Going back to my opening statement, Head North offers a sense of belonging here and it's a record that's captured me just the way I wanted to be. Flaws? Yes. Room for growth? Yes. But it's exposed and delivers.