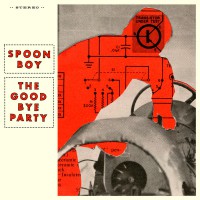 The Spoonboy / Goodbye Party split makes a lot of sense. Both bands anchored their sound in the first and second waves of rock and roll, as tempered by modern, jangly punk. They both also understand how to construct a pop song in the classic sense. The result is a pairing that swings like one of those mid-60â€™s 45â€™s.

The Goodbye Party lean off a sort of warm, Beach Boys melody and wash it over with garage rock distortion. The band uses surrealist imagery and a driving, but gentle melody to tell personal tales that really, seem to be able to be interpreted in any number of ways. Perhaps like some of their weirder Beach Boys songs, the band is experimenting more with word contrast and structure than story telling. It works, resulting in the kind of abstract, spacey stories that the Flaming Lips, Guided By Voices, and Neutral Milk Hotel used to make their trade. Thatâ€™s a pretty good trick.

On the flipside, Spoonboy both compliments and contrasts his partners. Spoonboys music, too, is primarily rooted in the bopping beat of classic rock and roll. But, whereas Goodbye Party paint abstracts landscapes, Spoonboyâ€™s lyrics are much more direct, sometimes feeling like heâ€™s reading out of his diary. â€œGreat Mistake Makerâ€ (which, with its understated trumpet flare ending also has hints of Neutral Milk Hotel) finds Spoonboy reflecting on the recovery from a fallout. As is his skill, he cleverly balances a pounding bass line against a more somber delivery.

But, the real grand slam is Spoonboyâ€™s second tune, â€œLinus & Me.â€ A jacked up rocker, Spoonboy runs through a series of people he knows, using only one or two lines to describe each of them, but somehow, giving a full picture. Between the bandâ€™s pounding back beat, its upbeat character, the people than wander through the song for just a line or two, and frankly, how great the hooks are, it could easily pass for a classic Billy Joel tune. Thatâ€™s one of the highest compliments I could give a song.