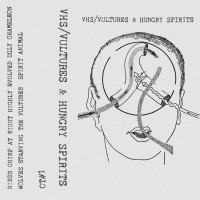 Seattleâ€™s VHS could be pigeonholed as punk, indie, garage, or straight up rock nâ€™ roll. Their latest release, Vultures & Hungry Spirits EP, is 18 minutes of pure energy. The band, who previously championed the cassette only release, played their first live show in honor of the new record.

Vultures & Hungry Spirits kicks off with â€œBirds Chirp At Nightâ€, a two-minute blast of trashy guitars and distorted vocals. The production is dirty and underproduced, and it sounds like thatâ€™s exactly what VHS is going for.

â€œHighly Evolvedâ€, the second track, adds an element of surf to the mix. The production remains the same (and doesnâ€™t waver throughout the record) with the addition of a spooky keyboard lead reminiscent of Man Or Astro-Man? â€œWolvesâ€ is the standout track on the EP, with a no-nonsense drum and guitar intro that immediately hearkens Northwest heroes, The Briefs. The vocals are recorded with an echo effect and the band throws in some classic call and response screams.

Vultures & Hungry Spirits might not be every punk fanâ€™s cup of tea, but it definitely has more hits than misses. VHS sounds like a band that would be a blast to see in any sweaty basement or club in America.

Godspeed You! Black Emperor: Asunder, Sweet and Other Distress