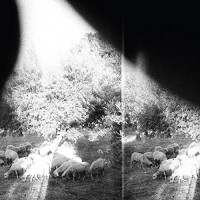 Asunder, Sweet and Other Distress (2015)

If I had to choose one word to best describe Godspeed You! Black Emperor, it'd be cinematic. Just ask director Danny Boyle. Using them in 28 Days Later was an appropriate way to bring out the sense of dread and impending apocalypse, which I admit got me to open my mind up to more genres like black metal, post-rock and heavy instrumentals. I found a deeper, more meaningful appreciation for bands like Deafheaven and Black Clouds and I realize (after taking in this album) that a lot of this can be chalked up to GY!BE's portfolio. Asunder, Sweet and Other Distress is another edition of jarring post-rock, experimental haze and once more, a call to arms for a band that really takes the concept of music and theatrics one step further.

This record clocks in at 40 minutes and the imagery they paint is as vivid as can be. "Let your imagination run wild" is my motto with these Canadians. "Peasantry, or 'Light! Inside of Light!" runs for 10 minutes and rattles off like an army marching to war. It's Armageddon to the beat of Black Sabbath. Immediately, there's a buzzy sense of urgency amid their spacey post-rock landscape. They hint at much more vast guitar-work throughout this song but this isn't explored or fully realized until the closer, leaving the mid-sections as fillers. The clashing riffs on this song help to build it as something that'll never linger as an afterthought but as a prominent war-cry. However, the second half of this track flows more melodically with tinges of violins. The string work contrasting with the hard-edged and scraping riffs compensate well for the lack of aggressiveness which I felt the kit needed to produce to complete this track. Overall, I envisioned an army a la Lord of the Rings on the field in a grimy throwdown but as the track concludes, swords stop clashing and the heroes emerge victors. Starting at darkness, then the light emerges. Like I said, I love how GY!BE leave so much to interpretation.

"Lambs' Breath" is another 10 minute jam but one that feels ominous. Demonic, even. It commences with a distorted guitar setting and as it announces itself, the screechy feel of the track gnaws at you. It then slowly tapers off, drifting into a soft hum. What did this paint? To me, an exorcism. But an appreciated breather from the opener. At this juncture, you're probably going to be wondering if they get any heavier. The third track, "Asunder, Sweet" doesn't help alleviate this concern. It flops as a six minute interlude or misguided excerpt. It's so sour that it throws back to the precursor track and leaves you wondering - 'How did these two jams take so long to start and kick in?'. The latter's especially frustrating as you're waiting for a payoff that never comes. However, if this song followed the opener, things might have felt differently. This quibble in arrangement doesn't stick for too long though.

Why? Because the closer in the 13 minute drama "Piss Crowns Are Trebled" smashes home as the crowning statement of the band. It defines the album with its string/violin-esque intro that calmly lulls into harmony. It's entrancing and has you giddy as you wait for an anthem. What ensues is a clever percussion-style that nods once more to a marching beat (a la the opener) and if you're a geek like me, you're picturing a gothic Game of Thrones moment with dragons in the sky. But, the climate shifts at the 5:00 mark or so with a huge symphonic swell. One that's done with such beauty and more so, a transition that's sweetly organic. This song's sectioned into thirds though and the final part's the real kick. Things get progressively aggressive and segue into a symphonic power-metal finale. It's a mighty and downright majestic crescendo to remind you just what this band sparks in you. Asunder, Sweet and Other Distress reinforces all the strengths of the band and with these four tracks, Godspeed You! Black Emperor continue to be an experience as opposed to just another arbitrary music product or pretentious concept. Trust me, you'll need some popcorn for this shit!

The Meatmen / Against the Grain: Live in Philadelphia