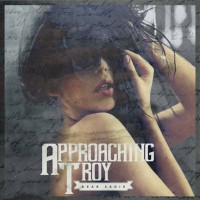 There was a time when piles upon piles of Myspace bands were crowding the music scene. These bands were eventually sorted into the $5 bin at your local Sam Goody and most likely lie in your music collection somewhere or are still stored in the Merchnow warehouse. Out of the ashes comes a band on the verge of the revival of emo, punk, and hardcore. Approaching Troy (a name that comes straight from the early 2000s aesthetic) write songs that are reminiscent of earlier Victory and Rise Records bands.

Right off the bat, Approaching Troy has re-embodied the mall emo/post-hardcore genre without limiting it to a certain audience. The songs have a heavy drive to them with intricate melodies that range between pop punk, hardcore and occasionally metalcore. The opening track â€œDear Sadieâ€ sounds like a fusion of Taking Back Sunday and Hidden In Plain View with dual vocals and harmonious parts.

Much of the songs flow in this style as well. The vocals really add what the band needs to finish off their nostalgic song. â€œThe Rescueâ€ is the first time we truly hear the softer side of Approaching Troy. The song is sandwiched perfectly in the middle of the EP. It doesnâ€™t slow down the EP at all, instead giving it a little bit of a shift in melody.

The EP ends itself with a heavy interlude and â€œThis Victory.â€ Arguably, the song is probably the best choice for a closer, but it doesnâ€™t necessarily give clarity to the record. The song is the weakest on the album, overall ending it on a low note. The song lacks the intricacy the rest of the EP has to offer.

Approaching Troy has a great sound that will hopefully only progress as they move on. With comparisons to Taking Back Sunday, The Audition and Hidden In Plain View, the band really wonâ€™t have any trouble finding an appeasing audience. The band does an awesome job writing nostalgic songs that arenâ€™t forgettable or outdated.

Minus the Bear: Lost Loves