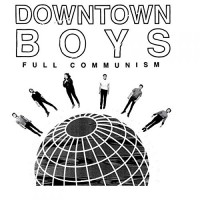 Life in 2015 is in many ways a study in contradictions. We're told that we're living in a post-racial society in which all are treated as equals and the problems of the past are just that -- in the past. Yet a simple flick of the TV remote or a few minutes spent reading the latest headlines or browsing social media tells a very different story, one about a society where little has changed, progress is blocked at every turn and old wounds not only remain open, but have salt poured in them on a daily basis. Thankfully, there are bands like Downtown Boys, who spend much of their debut record, Full Communism, loudly reminding us how far we still have to go.

For the uninitiated, Downtown Boys are a political punk band from Providence, Rhode Island, who shake things up in a variety of ways. They sing in English and Spanish, switching between languages with such seamless ease that even when listeners don't understand the words, they still get the point. The band also finds melody in unique places -- in this case, from the addition of two saxaphones that do much of the work that a lead guitar might normally handle. But make no mistake, the addition of a few brass instruments does not make this a ska record, nor does it water down the intensity in any way.

As the album opens, the band announce themselves with "Wave of History," and from there plow through a series of tracks addressing so many of our modern problems: racism, homophobia, xenophobia and the rest. Frontwoman Victoria Ruiz is a big part of what makes these tracks impactful -- she's not just spouting generic slogans, she's making pointed pleas that come from her own life experiences. When the chorus of the record's best song, "Monstro," hits and Ruiz repeats "She's brown, she's smart!" over and over, she's bringing the perspective and passion of someone's who has had to prove her intelligence to those who still make judgements about the whole of a person based on the color of their skin.

If there's one criticism, it's the final track, a cover of Bruce Springsteen's "Dancing in the Dark." The cover is well done, but on an album with a serious message, it seems a distraction, and might have been better off used as a b-side somewhere down the road. It's a small complaint though, and not one that has any real bearing on the album as a whole.

On Full Communism, Downtown Boys make not only a powerful noise, but a powerful case that political punk can be much more than vague, angry rants against "the man." It can be thoughtful without losing any of the rage, and at its best, can shake us awake and reignite our awareness of the world around us.

Minus the Bear: Lost Loves
Go to the review index