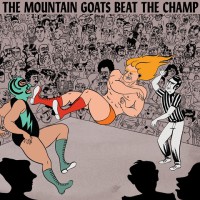 I havenâ€™t watched pro wrestling since I was in middle school, maybe younger. And now, John Darnielle, head honcho behind the Mountain Goats, has got me researching wrestlers. I would follow this man to the ends of the earth, obviously.

To the uninitiated, this might seem like an odd topic for an album by an indie artist who many outsiders may deem a â€œheavyâ€ lyricist, perhaps hearing things about Darnielle writing fictional tales of doomed couples who eventually divorce, tweakers who just canâ€™t help ruining their lives, and the death of his abusive stepfather. Well, this is another album about his stepfather, but from a more positive perspective than the masterwork The Sunset Tree, believe it or not. If youâ€™ve read about Darnielle, or heard the amazing long-form interview with Marc Maron on the WTF POdcast, youâ€™d know that the one event that could bring young John and his stepfather together was watching Southern California wrestling.

I was like, ok, this song â€œThe Legend of Chavo Guerreroâ€ is fucking incredible. Charges at you and never lets up, with energy, vocal hooks, and captivating lyrics about this character and the dynasty of the Guerrero family: â€œThe telecastâ€™s in Spanish / I Can understand some. / And I need justice in my life. Here it comes! / Look high, itâ€™s my last hope. / Chavo Guerrero, coming off the top rope.â€ I had to find out more, so off a-Googling I went. If youâ€™re curious as well, here is his wikipedia page, but more importantly, here is his sweet-looking (and official, apparently) Geocities page. Now, with further inspection, the song is more deeply about his stepdad. Holy shit, these lyrics! Check this: â€œHe was my hero since I was a kid. / You let me down, but Chavo never once did. / You called him names to get beneath my skin / Now your ashes are scattered on the wind.â€ Woah. Take that, evil stepdad.

â€œThe Legend of Chavo Guerreroâ€ is actually the second song on Beat the Champ. Darnielle is never one to fall prey to normal pop trappings so of course he sticks a relaxed track up front. â€œSouthwestern Territoryâ€ recalls the mellow piano playing he introduced to his sound in the mid-aughts, found especially present on Life of the World to Come. But like his last album Transcendental Youth, wind instruments pop up almost immediately, and the clarinet duet reveals itself more beautiful and intricate with each listen. We get more winds with the incredible bari sax lines pushing â€œForeign Objectâ€ into a ranking as one of my favorite Goats songs, yeah, already. Itâ€™s a great song about those classic wrestling heels, doing everything they can to upset the audience and injure the good guy. I mentioned this song in an email thanking the Merge PR rep who sent me this album, and he joked, â€we briefly considered the deluxe LPs coming with an official Mountain Goats shiv/foreign object.â€ Yes!

Stylistically and instrumentally, Beat The Champ comes off like a greatest hits of genres and moods Darnielle has experimented with his whole career. There is the traditional Goats sound on the intro of â€œHeel Turn 2,â€ though the band joins him in the second verse. There are country songs, and lap steel is found on many tracks, my favorite being â€œAnimal Maskâ€. â€œHeel Turn 2â€ is a ballad, and has an outro with some amazing piano, reverbed to the end of the earth and providing a somber break mid-album. â€œFire Editorialâ€ is a cool jazz tune, (as in the genre cool jazz, not â€œcool, dude!â€), with some of Darnielleâ€™s most accomplished piano playing to date, seemingly inspired by greats such as Thelonius Monk, but within the confines of pop chord changes ends up sounding more like the music from Peanuts specials (written and performed by Vince Guidaldi and his trio). I say that lovingly; that music stands the test of time as great jazz, linked with a cartoon or not. Then there is the charging â€œChoked Out,â€ strummed as furiously as anything from The Goatsâ€™ 90s raw boombox-era songs, but supported by Peter Hughes on bass as well as electric guitar (he plays all the electric on the album) and the fantastic John Wurster at the kit.

Some tracks are directly about wrestlers and lives of the men who played them, such as the real-life murder of Frank Goodish, known as Bruiser Brody, by a fellow wrestler and booker in a locker room shower before a match (â€œStabbed To Death Outside San Juanâ€). But for the most part, wrestling moves and antics are a cover for moments in Darnielleâ€™s young life and especially his relationship with his late stepfather as I said earlier. Iâ€™m usually not the best at digging for deeper meanings in songs, but Darnielleâ€™s lyrics hook me and I have to dig for the meanings and emotions hidden below the surface. His stepfather is â€œThe Champ.â€ Darnielle â€œBeat the Champâ€ by leading a productive life as a successful musician, after persevering through many hardships in his childhood. From verbal and physical abuse and witnessing his mother abused, to his early adult years full of drug abuse, a propensity towards destruction, and severe financial hard times, Darnielle has said in interviews he hopes he can be some small beam of light to those currently in abusive situations, as an example that yes, it can get better if you persevere and just keep hope alive.

Now, one quick shout out to my friend and Punknews reader James Gater who pointed me to an interview that Darnielle did with WWE.com. I never would have thought the WWE would acknowledge a musician that writes stuff as quiet and mellow, or jazzy, as the The Mountain Goats, but I suppose he proved his wrestling fandom and historical knowledge of the â€œsports-entertainmentâ€ sufficiently. He says near the end of the interview: "There's something about wrestling that's kind of progressive, you know?" Darnielle said. "It's kind of this open place for people to sort of play these characters. In a way, you expose what those characters are like in real life. It's sort of showing the true face of people, who would otherwise be saying stuff behind your back. And so yeah, with the release of the album, my involvement has grown exponentially." He also talks about his favorite venue, the Olympic Auditiorium, and about shaking Andre the Giantâ€™s hand.

Iâ€™ve blathered enough here, so just listen up: This is another great Mountain Goats album. If you are a fan you probably have this already but if not, got get it asap. If youâ€™re unfamiliar, this is as good a place as his masterwork The Sunset Tree to start, as this is like the sequel, but coming from a seemingly lighthearted place with the wrestling theme. Like I said, itâ€™s a greatest hits of Goats sonics over the past decade, so it will introduce you to everything Darnielle and Co. do well. Or hell, if youâ€™re just a wrestling fan, this would be a fun album too. Go get it!