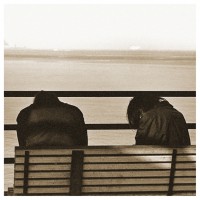 As of II, Metz have been added to my "anger" playlist. This includes Refused, Drive Like Jehu, Fugazi, Ceremony and At The Drive-In. You can sense the pattern, right? It's all about bands -- pissed off, revolting yet making painfully beautiful music. At the core of this heartfelt chaos, these bands have something genuine about them and that's what struck with Metz in 2012; and furthermore, that's what carries over into this album.

The opening riff of "Acetate" is the template for this record. Musically, it lays the groundwork for almost every single beat laid down, all well-differentiated of course. It's harsh, dissonant and eerie but more so rife with that sense of urgency that Metz usually kick things up a notch with. The distortion, fuzz and noise-punk may not be as cerebral as the 2012 record but this go around, Metz explore a broader horizon and pack the record with more hurt. In fact, there's a bigger emotional draw on II than I thought there would have been. The guitars in particular craft so much of the character on these tracks and it's the rabid nature of this musical framework where tracks like "Nervous System" and "Eyes Peeled" shine the most. Things feel so open and on the line.

In terms of being raw and angry, it's hard to imagine Metz being more enraged than this. This album absolutely does not give a fuck and this is the kind of revolution we need this day and age where commercialization seems more rampant than ever. Metz are at their most creative and their most liberal. II is one of the most in-your-face records you'll hear this year.

The Mountain Goats: Beat the Champ

The Wipers: Is This Real?