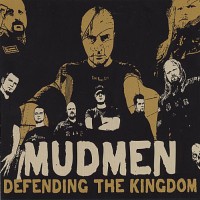 The Mudmen, from Ontario, Canada, formed in 1998 and have released seven albums since. Defending the Kingdom, released in 2003, was the final album featuring the bandâ€™s original lineup, with vocalist Zoy Nicoles. Defending the Kingdom is a solid rockâ€™nâ€™roll album, with a splash of punk and a lot of bagpipes thrown into the mix. The album itself is a little less Celtic and a little more rockâ€™nâ€™roll than the previous two releases, though thereâ€™s still enough bagpipes to satisfy anyone.

Zoy Nicolesâ€™ vocals shine on this album. While not, perhaps, entirely unique, his voice is perfect for a rock album like Defending the Kingdom. Theyâ€™re heavy to match the general sound of the album, yet still capable of overflowing emotion in slower songs like â€œFatherâ€ with its seething and bitter lyrics, or â€œHow Do You Like Me Nowâ€, brimming with anger.

The tracks on Defending the Kingdom had plenty to compete with: The bandâ€™s first, self-titled, album contained such notable tracks as â€œ5 Oâ€™Clockâ€, â€œSaturdayâ€, and â€œDrink and Fightâ€, after all. But the album has its own highlights and noteworthy songs, such as the lead track, â€œDefending the Kingdomâ€, â€œMoney Meâ€, and â€œStand Aloneâ€, among others. â€œDefending the Kingdomâ€ starts things off strong, with a tempo that picks up and builds towards the chorus. And bagpipes. Itâ€™s a track that lets you know exactly what youâ€™re in for with the album itself. Heavy guitar riffs, powerful vocals, and infectious choruses. â€œMoney Meâ€ is, perhaps, one of the catchiest tracks on the album, with both verses and choruses perfect to sing along with. â€œStand Aloneâ€ has a slightly slower tempo, but it isnâ€™t lacking in the heavy guitars one comes to expect from the album, and, of course, the bagpipes.

Defending the Kingdom is, while not an instant classic, a very solid album. Thereâ€™s nothing out of place, nothing unexpected. Each song is solid, itself, and the album highlights Nicolesâ€™s rockâ€™nâ€™roll vocals. Itâ€™s an easy album to sing along with, and one best listened to loudly. Unless you donâ€™t like bagpipes, in which case I recommend you steer clear.